Did Tony base J.A.R.V.I.S. off of the real Avengers butler?

J.A.R.V.I.S., the advanced A.I. which formed the basis for Vision's personality, has been prominent in the MCU from the start. In the first Iron Man film, he's shown as a program that basically serves as Tony's right hand, both in most technical capacities, and in mundane everyday tasks. He was then transferred to the synthoid body Ultron created, gaining further sentience and the capacity for emotions and becoming the Vision. This is semi-close to comic book Vision's actual origins, in that his A.I.'s "neural patterns" were based on that of the then-comatose Avenger, Wonder Man, who has yet to appear in the films.

However, in the comics, Jarvis has taken several incarnations.

Prior to the late 2000s, Jarvis was an actual person who served as the Butler at Avengers Mansion. Supposedly, he was hired by Tony to be the "man in the chair" for the Avengers, serving as attache, messenger, cleaner, cook, keeper of their information center, limited bodyguard and tactical hub on some missions. I know he was a real person, because at one point he was dating Aunt May Parker. Later stories, however, made it seem like the Jarvis "person" was either a hologram, or an android.

I don't know if it's a case of occurring in different universes [J.A.R.V.I.S. seems to have been an A.I. in the Ultimates 1610 world] or if the movies influencing the comics, but its been generally accepted that Jarvis is a computer program now; I haven't seen a "live person" version in some time.

So I was wondering:

Did something happen to the "person" Jarvis, and he's now been "uplinked" to a computer, or is the A.I. J.A.R.V.I.S. just based on the person as a kind of tribute?

And if so, is Jarvis [the butler] still alive and well, and if so, where is he now?

J.A.R.V.I.S. in the MCU is an artificial intelligence that stands for Just A Rather Very Intelligent System. However, this is a handy acronym as J.A.R.V.I.S. is named after Edwin Jarvis a butler for the Stark family and father figure for Tony. We don't see much of Jarvis in the MCU films, although he does appear in Agent Carter, and only get a glimpse of him in Avengers: Endgame back in Camp Leigh when Tony and Cap go there.

However, in Iron Man 2: Public Identity Issue 2, a canon comic to the MCU, it is somewhat revealed that Tony does appear to have named J.A.R.V.I.S. after Edwin Jarvis. 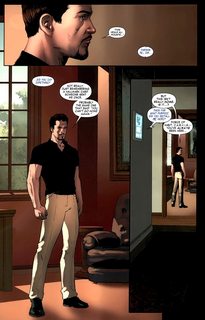 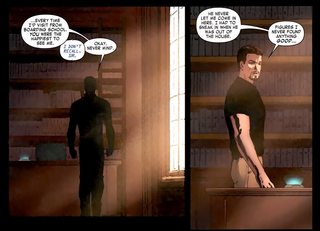 4
How did Spider-Man come to be working for the Future Foundation?
7
What are the main differences between the numerous Avengers comics
3
Can Ultimate Toad spit mucus?
1
Was Spider-Man granted his powers by a retrovirus like HIV?
7
When did the Marvel Cinematic Universe U.S. presidential history diverge from the real world's?
17
Is Thanos a Mutant among Titans?
3
Does Vision have Computer/Machine type abilities?
6
Why didn't J.A.R.V.I.S. detect Tony in Endgame?