What elements of Star Wars were derived from Flash Gordon?

George Lucas's famous opening crawl used in most of his Star Wars films came directly from Universal's film adaptation of the Buck Rogers comic strips, which were also used in Flash Gordon.

--EDIT--
Wikipedia attributes this to both Buck Rogers and Flash Gordon. This article prompted my question. However despite Buck Rogers being the first serial comic of this kind, Star Wars Fandom states that Flash Gordon specifically was Lucas' inspiration. More confusing is the fact that both heroes were played by the same actor - Buster Crabbe. 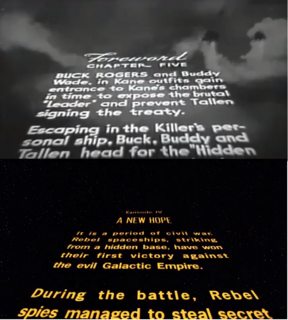 Some things in Flash Gordon were notably NOT brought into Star Wars, such as the transporter which they used instead of elevators (but did make it into the Star Trek universe).

Aside from the obvious things like "they both have space ships," what other elements of Star Wars movies uniquely came over from the Flash Gordon? Either in unique themes, effects, or cinematography. Please avoid speculation.

PART ONE OF TWO:

Episodes of Flash Gordon Conquers the Universe (1940), except for the first one, begin with opening crawls summarizing events in previous episodes.

Episodes of Flash Gordon's Trip to Mars (1938) have a different method of summarizing events in previous episodes. A member of Queen Azura's air force turns a knob on a television like device to show screens with written summaries of past events.

The openings of episodes of Flash Gordon (1936) have static written screens and a voice reading aloud what is written on the screens.

Bruce Calvert's answer to this question: https://movies.stackexchange.com/questions/104343/origin-of-movie-opening-crawl2 has a link to a fascinating and informative article about the origins of the Star Wars opening crawl, which apparently is rather complicated and somewhat mysterious.

Was Buck Rogers the main and/or only source of the science fiction elements in Star Wars (1977) and its sequels?

I doubt that any elements of Star Wars come uniquely from Buck Rogers, Flash Gordon, or any other single source. I think that George Lucas & co. were aware of all the plot elements and science fiction concepts in Star Wars from multiple non science fiction and science fiction movies, movie serials, television shows, radio shows, comic books, comic strips, novels, short stories, etc., etc., that they were exposed to during the decades it took them to become old enough to work on Star Wars (1977) and its sequels.

For example, Philip F. Nolan's Armageddon 2419 AD in Amazing Stories, August 1928, introduced the character of Anthony "Buck" Rodgers, who became the star of the Buck Rogers newspaper comic strip in 1929. The Flash Gordon comic strip was created to compete with Buck Rogers in 1934, and it is said that:

One source for Flash Gordon was the Philip Wylie novel When Worlds Collide (1933). The themes of an approaching planet threatening the Earth, and an athletic hero, his girlfriend, and a scientist traveling to the new planet by rocket, were adapted by Raymond for the initial storyline.[7] Raymond's first samples were dismissed for not containing enough action sequences. Raymond reworked the story and sent it back to the syndicate, who accepted it. Raymond was partnered with ghostwriter Don Moore, an experienced editor and writer.[5] Raymond's first Flash Gordon story appeared in January 1934, alongside Jungle Jim. The Flash Gordon strip was well received by newspaper readers, becoming one of the most popular American comic strips of the 1930s.2[5]

Not the answer you're looking for? Browse other questions tagged star-wars flash-gordon buck-rogers or ask your own question.

7
Was Ming the Merciless the only Major Enemy of Flash Gordon?
2
Did the Buck Rogers Serials Follow the Comics?
5
Has there ever been a video game based on Flash Gordon?
2
What's the deal with Flash Gordon and tree stump reference?
11
Whose voice was dubbed in for Flash Gordon?
3
Ships in Buster Crabbe's Flash Gordon
5
Flash Gordon comic where they treat Ming for common cold?