In Thundercats [1986] is the Sword of Omens magical on its own, or empowered by the Eye of Thundera?

Within the classic Thundercats universe, is the Sword of Omens itself a magical item that was further empowered by the Eye of Thundera?

Is the sword itself no more than a weaponized conduit, with all powers then attributed to the Eye?

The series seemed to give differing ideas via implication throughout the seasons.

Its properly established from season 1 that the Eye is "the source of the Thundercats power", and that all Thunderians who are granted the title "ThunderCat" become somehow mystically connected to and further empowered by the eye. Anything that may befall the eye will have a corresponding negative effect on the warriors themselves. This seems to be backed by the fact that when Lynxo, Pumyra and Bengali were added to the team, Lion-O had to "knight them", using the sword to mark them with the Thundercats insignia.

However, while the sword and eye are connected, Jagga himself said the eye was "embedded into the mystical Sword of Omens", implying that the sword itself had magical properties before the addition of the Eye. Also, when the sword was broken by the superhumanly strong Tug Mug, there was absolute no effect on the eye itself, or the Thundercats.

This sort of implies that the sword itself can be damaged, but the eye will remain unaffected.

Are there any canonical sources that can verify this separation? And if so, what are the sword's powers by itself, without the eye?

NOTE: I spoke specifically to the classic Thundercats cartoon and universe because the 2011 series seems to to have differing magical aspects and storylines which disregard a lot of what the classic series put forth as canon.

In that series, we saw the metal of the sword of Omens itself is unique, having been crafted in secret by space-faring Thunderians under Mum-ra's rule from left over magical metal. This metal was created by the destruction of an entire star system with some living inhabitants, and was made to be a powerful enough vesel to wield a mystical stone that would eventually become the Eye of Thundera. The Eye itself is but one of a set of cosmic ingots of incredible power which Mum-Ra [reimagined as an ancient, mystically empowered space-fairing dark tyrant] is trying to collect.

The exact power of the Eye is sort of nebulous in this series; it's not unlike the Infinite Stones of Marvel, just not tied to one singular aspect. However, it was made clear that the sword itself was a fairly magical weapon, even without the Eye.

I can't really speak to the modern-day Thundercats comics, so I do not know if their canon follows the 1985 series, the 2011 series, or if they do something entirely different.

As such, if different answers need to be given for all versions, that would be understood.

In the (original) Thundercats episode Excalibur, the titular sword attacks and stabs the Eye of Thundera. The Sword of Omens immediately loses its ability to fly, shortens in length, stops glowing and depowers the Thundercats. 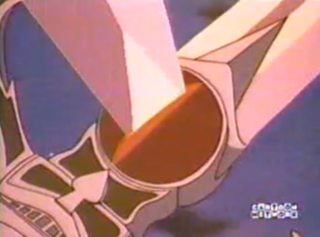 It would appear that the sword is merely a repository for the Eye rather than magical in its own right.

Not the answer you're looking for? Browse other questions tagged weapon magical-items thundercats or ask your own question.

5
Would the Sword of Gryffindor poison you?
6
What are the limits to the magical knives in Supernatural?
26
Did the original Thundercats cartoon take place on Earth?
10
Is it ever explained why the Thundercats have species specific names?
6
Do ThunderCats and SilverHawks share the same universe?
6
What brooms do the Weasleys own?
0
What is the first story with a magical Taco?
4
Fantasy book series; Brother is jealous of sister's magical (sword) glove
3
Which episode is the one where the cat from the eye of thundera gets out of the sword?