How does the water tribe use water to heal?

In Avatar: The Last Airbender, members of the Northern Water Tribe use water to heal.

When Katara shows some bending prowess, she's told only men are allowed to bend in the Northern Water Tribe. They ended up whisking her away into a healing class.

I'm left to assume the female healers would have been full-blown benders had it not been for the Northern Water Tribe traditions.

So, when they heal using water, are they bending? If not, can non-benders heal?

Whether or not they are bending, how are they manipulating the water for healing? What powers does the water have? 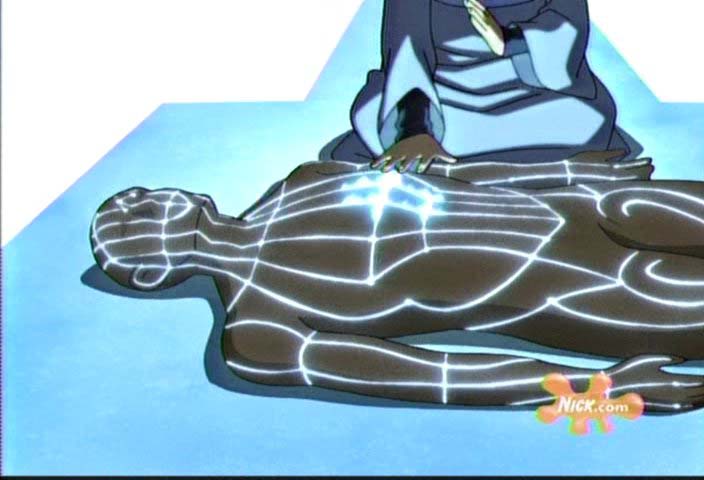 Water bending and healing are the same art.

In answer to your question:

When they heal using water, are they bending? If not, can non-benders heal?

The division between Healing and Waterbending arises solely due to the sexist traditions of the Northen water tribe:

We see that Hama was a female water bender in the above link. There are also male healers in republic city.

Healing is a 'unique sub-set' of water bending. To remove it from the pool of talents a water bender can call on would be like saying blood and plantbending wasn't water bending.

The main difference is that water bending is external to a living being, and the subsets are internal. You manipulate the water inside a person whether it's via bloodbending or healing. The two are very similar in that respect.

So we have to answer,

Would [the healers from the northern water tribe] have been full-blown benders had it not been for the Northern Water Tribe traditions?

Yes, had they been given proper training I'm confident they would have been full waterbenders. They had simply been only allowed to focus on healing. I wouldn't be surprised if some of them had secretly water bended, even if by accident.

What powers does the water have?

None, in the same way the 'fire' that forms lightning in lightningbending, nor the motes of earth used in metalbending have any overt powers external to the bender.

Some water does have spiritual properties, which aids healing, but it's not essential. It helps because healing effects chi pathways, which, incidentally if blocked prevent all healing.

To bring clarity to the ideas surrounding healing and water-bending:

So far, waterbending induced healing has been shown to work on physical injuries, such as burns (Toph's feet and Katara's own hands), lacerations (Hakoda's injury during the Day of Black Sun), broken bones (Sokka's left arm), diseases brought on by severe pollution (Jang Hui villagers), and severe tissue damage caused by lightning bolts (Aang and Zuko); it has even shown to counteract mental distress and tampering (Jet). --Avatar Wiki > Healing 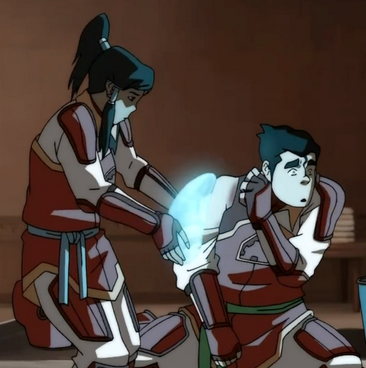 Healing IS waterbending. Healers can manipulate water the same way a waterbender can when fighting. There's no difference.

Healing is MOVING WATER to manipulate chi. They're not energybending. They're still MOVING WATER. Therefore, if you're a HEALER, you are AUTOMATICALLY a waterbender. In fact, if you can move water in any way, you ARE a waterbender.

If you are a healer, you can fight using your waterbending, even if you're the most incompetent fighter ever. You can still move water.

The usual answer in elemental power systems where water grants healing is that, since most of the body is water, you can move that water to guide the materials into positions for the body to heal itself. Sometimes the healer actually maneuvers the pieces into position, healing the person directly, instead of just encouraging the body to do so.

While hypothetically, a significantly powerful computer with those elemental powers could actually do this, it reflects a fundamental misunderstanding of how hilariously-complicated the human body actually is to assume a human could keep track of everything. Our most powerful computers today are unable to run a full simulation of a single human cell, so this explanation assumes that there are people with several billion times more processing power in their brains than supercomputers, also able to solve complex dynamics problems over that same space.

Another example of this idea would be the Codex Alera.

Without water you can't have life so it is suitable for the element to have healing properties. I believe that healing is a rare ability only possibly for benders because for one I haven't seen a non-bender heal anyone or themselves and for two I think only waterbenders can have the special ability to heal and not all waterbenders can heal anyway.

Chi, the life force of the body. If I acquired an injury my Chi would loose its flow. Causing flash backs and head aches. So, what Waterbenders do, is. Use the flow of the water, to get the Chi back on track.

12
Would it be possible for some to bend two elements?
9
How does each bender produce his or her element?
10
Do benders have to bend parts of their body to bend the elements?
2
Did the Fire Nation support child labour?
15
In the Avatar world, what exactly are they bending?
10
Bending of water and air inside people's bodies
3
What are all the types of bending?
2
How come Korra could bend three elements so young before training?
3
After ATLA series ended and the Harmony Restoration Movement came to a close, what was Katara's next role?
8
How were people first born with bending abilities?