80s/90s Post-apocalyptic novel, medieval with a “great fire” and a “mystic / shaman” [duplicate]

Ask Question
Asked 5 months ago
Active 5 months ago
Viewed 105 times
5
This question already has an answer here:
A story where technology is forbidden, but used by priests (1 answer)
Closed 6 months ago.

I remember reading this novel back in High School in the late 90s, possible early 00s.

The novel in paperback form was quite substantial, must have been at least 600 pages long.

The main character was a middle aged (I think) man.

The world was living a medieval-esque way of life. I imagine the actual apocalypse happened many decades, if not centuries, before, as no one could remember what happened. I recall people referring to a "great fire".

There were no aliens or other supernatural forces at work. It seems as though society as we know it just ceased to function, either because of war or something else.

Some technology from the pre-apocalyptic world was still being used.

There was this Shaman/Mystic character who I think knew more about the truth of what happened than he was letting on. I'm pretty sure he was able to generate and manipulate electricity to dupe the local populace into thinking he had powers.

The main character eventually goes on a journey over "cooled lava" (roads?), and that's as far as we got with the story before the end of the school year, sadly.

Except for the age of the protagonist, everything matches the beginning of the Sword of the Spirits trilogy, by John Christopher: The Prince in Waiting, Beyond the Burning Lands, and The Sword of the Spirits. They were first released in the early 1970s. They have apparently been released as a single-volume omnibus edition (as The Prince in Waiting Trilogy), which would be the right length—and also as a boxed set. 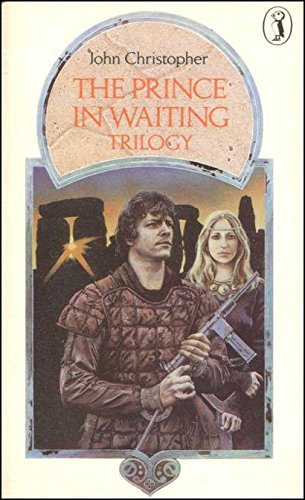 The stories are set in the South of England, mostly in Hampshire, in a post-apocalyptic future where, due to a worldwide ecological catastrophe, life has reverted to a militaristic, medieval setting of walled cities and perpetual warfare. Christians are a despised minority, as spiritual matters are in the hands of a priestly class of monastic "Seers" who interpret the will of the "Spirits". There are signs of the past existence of the modern world in the ruins of great cities and "high roads" which dot the harsh landscape, but the Seers have made the technology of the "ancients" anathema, and anyone dabbling in "Science" is immediately put to death.

The catastrophe has also resulted in a greatly increased number of birth defects. People with dwarfism constitute a separate caste to "true" men and fulfill the mythical role of forging weaponry, along with other metal work. People called "polymufs", who have other disfiguring mutations, are the lowest caste, as menial workers and wage slaves, regardless of whether they are actually physically or mentally disabled.

The protagonist is Luke, a teenager whose father becomes prince of Winchester, one of the walled cities that dominate post-apocalyptic England. He gets involved in the cutthroat politics of the city and eventually learns that the Seers, the religious leaders who enforce the prohibition against technology, are actually preserving and using technology themselves, hoping to eventually guide people back out of their dark age.

In the second book, Luke literally travels over a pathway of cooled lava. A range of active volcanoes has emerged separating England from Wales (the titular Burning Lands), but a pass is found across them, and the later books focus on the interactions between the English and the Welsh, who have very different civilizations. (True to the image on the cover shown above, Stonehenge features prominently in the story, and Luke does eventually arm himself with a Sten gun.)

For other questions where this series as come up, see:
Looking for a book series from the 1960's - NOT the Tripod series
What is the title of a book that is set in the future, but there is no electricity?
YA Fantasy featuring a giant blob and a warrior
A story where technology is forbidden, but used by priests
Trilogy of books set in the future with "knights", "priests", and dwarfs and a rebellion

Not the answer you're looking for? Browse other questions tagged story-identification novel post-apocalyptic medieval or ask your own question.

13
A story where technology is forbidden, but used by priests
21
What is the title of a book that is set in the future, but there is no electricity?
3
Looking for a book series from the 1960's - NOT the Tripod series
3
Trilogy of books set in the future with “knights”, “priests”, and dwarfs and a rebellion
6
YA Fantasy featuring a giant blob and a warrior