Norse mythology video game with someone trapped by their hair

I think I saw this reviewed in an issue of Video Games & Computer Entertainment on the early 90s. I think it was an adventure game. It was set in a Norse mythology setup, although I want to say the protagonist (male?) was not the heroic sort. The bit that stuck with me was an image in the review with someone with light hair (I want to say blonde, but they might have been more redheaded) who was trapped in something like stocks by virtue of multiple braids of hair clamped into it. My memory was it being a female trapped by the hair on the top of her head, but it might have been a guy with their beard. Whichever way, they had an agitated, maybe agonized, look on their face. That image had stuck with me for decades now, and I realized today that I might find an answer here.

It was probably on the PC, but I did occasionally read the video game reviews even though I couldn't play them.

This sounds like Heimdall. The scene with the woman in the stocks: 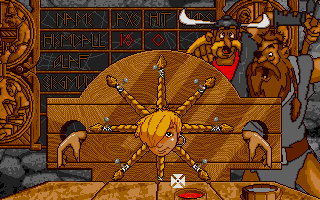 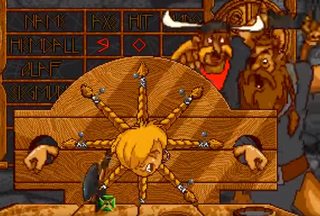 It was the first of the three skill tests at the start of the game, in which the player's performance would determine the maximum skill level of adventurers who would join the party. In that test, the player had to throw axes to cut the woman's braids. The other two skill tests were wrestling a pig and fighting on the deck of a longship.

Not the answer you're looking for? Browse other questions tagged story-identification video-games norse-gods or ask your own question.

2
Book with Norse gods and runes
7
Manga about a guy trapped in a video game and is looking for a way out
9
Nintendo Game involving a fighting tournament and superhero costumes - Magazine comic adaptation
7
Anime/cartoon with kids battling with robots in a game
2
PC game, probably on Steam, involving mystic martial arts in a medieval Asian time frame
10
Video game with alien bio armor
6
Cartoon: 4 kids transform into video game characters to save the world from a hacker and an evil program