Around 6-10 years ago I used to follow this webcomic. There was a woman who may have been called Alice who was a human transported into a fantasy world. She worked as a police officer, I think her partner (on the force who she later dated/married?) was possibly called Jim, he wasn't human and I think had a sister with several small children.

I think the police captain was quite big, burly, and part cat or something?

There was one strip I remember where the main character had her 'biological clock ticking' so she ran to look at possibly a coworker’s baby in a pram? The baby then proceeded to hit her in the head with a rattle and her wish to have kids immediately disappeared?

Another main character was a small red demon, he was quite sarcastic and I think liked coffee. He was possibly the other character's roommate? He was sometimes visited by other demons, like Paranoia.

Sounds like On the Edge - features Alice Little working in law enforcement, and her demon roommate Mr Negative (Negs).

On The Edge is many things; An Alice in Wonderland inspired tale where Alice has grown up in a Wonderland populated by Cats, Demons, and Elves, among other strange creatures. And it is also about our inner Demons, personified through Mr. Negative and The Demon Society, who feed off of our emotions, without us even knowing it! It explores psychology, mental health, phobias, love, and depression, with a bit of law enforcement mixed in. It’s non-sensical and fun, and I hope you enjoy it!

An image showing Alice and Negs. 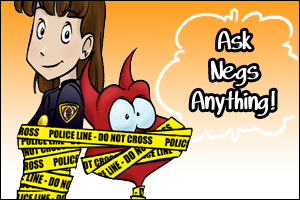 Not the answer you're looking for? Browse other questions tagged story-identification webcomics demons or ask your own question.

11
Help Identifying fantasy novel about magic red jewel
4
Online fantasy story about puzzles and a girl who remembers the future but not the past
7
Fantasy book - Woman from our world winds up in a fantasy world, meets chosen one, beats him in singing contest and wins cup
4
Webcomic (Keenspot?) about an amateur stage magician in a world where magic is real
8
Webcomic about a demon, a humanoid and an angel
9
Webcomic about a robot girl able to use magic who moves to the city to go to school
8
Cheesy YA novel about global VR MMORPG fantasy world
5
Webcomic from around 2014-16 about demons and pacts
8
Horror novel about an immortal snake-woman, feeds on blood and can take over human bodies
4
Webcomic with anthropomorphic animals featuring a possible ghost in the library