Book about all-female world with 1 man remaining to reproduce

I found this book in my step-dad's stuff in the basement when I was 12. I feel like it was probably written in the 70s. I would sneakily read it, so it may have some slight adult themes, but not much if I remember.

I believe the plot was there was 1 man being kept by a future society of women to help reproduction. I feel like his name was Adam and like the title may have mentioned Adam.

Mr. Adam, a 1946 novel by Pat Frank, better known as the author of Alas, Babylon. The text is available at Faded Page. It's not an all-female world, but there's only one fertile man in the world, and his name is Homer Adam. Does any of these covers ring a bell?

Front cover blurb from a 1948 Pocket Books edition (image below):

Would you like to be the only man in the world who could be a father? Mr. Adam was that man! What happened to him after an atom bomb explosion made every other living male sterile is an extremely funny story.

After a nuclear power plant in Mississippi explodes, it was soon realized that a previously unknown form of radiation was released. The radiation caused all men on Earth to become sterile, even boys who were still inside the mother's womb. However, ten months after the explosion in Mississippi, a doctor delivers a perfectly healthy baby girl. It's soon discovered that the child's father, who has the surname Adam, was more than a mile under the surface of Earth inside an old silver and lead mine during the explosion. It would appear that Mr. Adam is humanity's only hope to stave off extinction.

Review by P. Schuyler Miller in Astounding Science Fiction, May 1948, available at the Internet Archive:

Pat Frank's "Mr. Adam" (Lippincott, $2.50) is by far the best of the three books. It would be entirely at home in such a magazine as Science Fiction if it were not for the conventions which keep honest treatments of sex problems out of "family" periodicals. Briefly, every man in the world except gangling, carrot-topped, bashful Homer Adam is sterilized by the radiations from an atomic blowup—Adam was in a lead mine at the time. On this one unwilling male rests the responsibility for giving the human race a new start. Mr. Frank misses no opportunity to carry out the logical possibilities of the political, psychological, and physical free-for-all over this second Adam. He could have written just another dirty book, and would perhaps have sold more copies. Instead he has told a story which can be read as a joyous satire on American bureaucracy—as a somewhat uninhibited development of a standard science fiction theme—or for just plain fun. 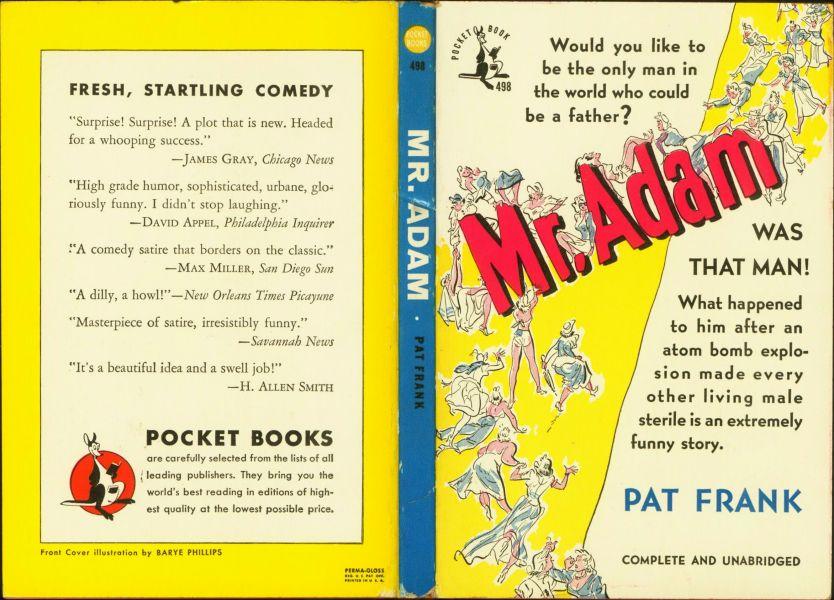 Another possibility is Alph by Charles Eric Maine (published as World Without Men, 1958, revised as Alph, 1972). (The 1972 version was issued by the Science Fiction Book Club, so that might make it more common.) 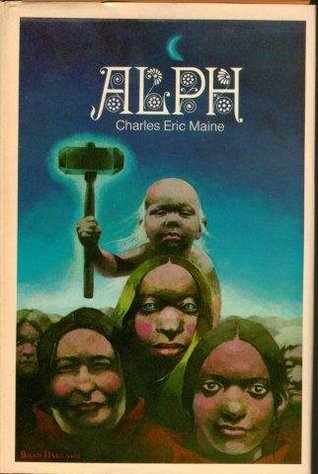 (Good lord, that is a terrible cover. It has haunted me through the ages.)

Does any of these sound familiar:

(You can borrow Alph from archive.org if that sounds like your cup of tea.)

14
Dystopia where all adults get suicide pill at age 21, father gives his to son
23
I'm looking for a Sci-Fi book with a female protagonist who doesn't wear logos
8
Book about girl who finds eggs of mechanical spiders/scorpions?
6
Title of book about world of public thoughts where boy discovers silence?
13
Book identification: 1990s children's book with robot and credit card