Collection of scary stories for children: boy changes into a bat at night, girl sees a horse's ghost

I am looking for at least two books. Each book contained a collection of scary stories. I used to borrow them from the library where they were in the children section (up to age 12, but I'm unsure about the specific age category).

One story was about a boy who changed into a bat at night. I remember vividly he ate moths and would find pieces of them (between his teeth or on his pillow?) when he woke up.

One of the other stories was about a girl who saw the ghost of a horse in a meadow in the morning, possibly walking along a living horse. I believe the ghost horse was either white or grey. It might have been hers once. The clue was that she found out it was a ghost and that the horse died of eating from a yew tree which grew at the edge of the meadow.

The books must have been published before 1990. I remember them as hardcover books with at least one book having a dark red cover. The other was possibly blue. Illustrations were few, black and white and not in-your-face scary.

I read them in Dutch and I have no idea what language the books were originally in.

It sounds like you're looking for the "Scary Stories to Tell in the Dark" series.

They where a series of collections of short stories published between 1981 and 1991 (3 books). The wiki says they were in English, but I'm pretty sure they were popular enough to be remade in other languages.

They have been printed multiple times, each time with a different cover, most were paperback, but they have printed a collection of the three books in hardcover.

The Methuen Book of Strange Tales by Jean Russell. 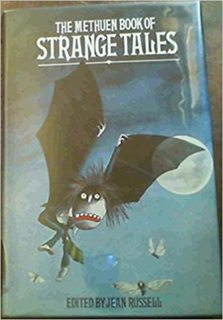 The moth story is "Moths", and is described in this forum post on AbeBooks, the horse story is " When the Grey Horses Trot", and some of the other stories are described here. 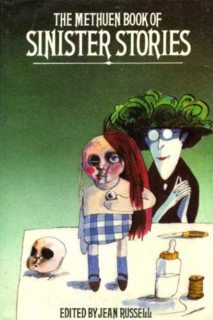 I would suggest looking for a series of books published by Random House for young people, they were all "Alfred Hitchock's" something-or-other such as Ghostly Gallery or Sinister Spys - I hope this helps. Each book had 11-13 stories with either black & white or black, green & white illustrations.

Maybe you are looking for the books from "Het Griezelgenooschap". These consist of stories written by Paul van Loon and friends. Scary as a kid, scary now. Some books contain only one story but several are collections of spooky tales. A list of all books can be found here.

The other one that comes to mind is the "Scary Stories for Sleepovers" series, the wikipedia page for which can be found here: https://en.wikipedia.org/wiki/Scary_Stories_for_Sleep-overs