The ending didn't seem to fit any of the sociological or scientific themes of Aniara. The name of the story itself implies despair, and it continually devolves in each act. However by the nature of that final scene, 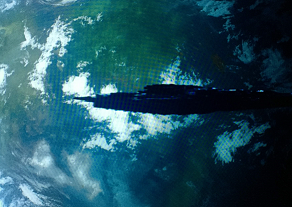 carrying remains of her 8,000 passengers and algae 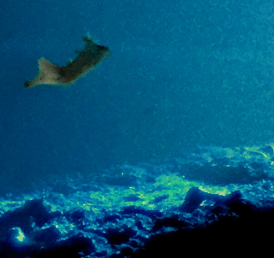 it seems to actually leave hope. Was it the film maker's intent to express the idea of panspermia?

Please use spoiler text in your answers!

Note the director has confirmed that the ending scene I am asking about is both true to the Swedish poem and a fundamental part of the story.

Kågerman obtained permission to adapt Martinson’s poem thanks to the blessings of the poet’s daughters, Harriet and Eva. “They were very open-minded and excited about the film,” she says. “Their only concern was for us to stay true to the ending of the poem, which we also did.”

I have researched several online reviews and the all-important ending scene is normally glossed over, like in the case of this horrible New York Times review. This could be to protect the quite shocking and unexpected ending, or just because the reviewer was too lazy to sit through a 110 minute film. But again, per the author that is an essential part of the story.

I am not inviting film critique or interpretations and such are not appropriate for this site. Only answers which reference intent are appropriate (staff interviews and canonical references). Was this ending chosen to show panspermia in action?

It certainly wasn't intended in the original source poem. That ends with the mima worshippers sitting huddled against the encroaching darkness, then eventually dying and turning to dust as their "sarcophagus" continues to hurtle through space for thousands more years.

There's no good indication that their bones ever come to rest, anywhere other than the inky black of space.

In our immense sarcophagus we lay
as on into the empty seas we passed where cosmic night, forever cleft from day,
around our grave a glass-clear silence cast.

Around the mima’s grave we sprawled in rings,
fallen and to guiltless ashes changed,
delivered from the stars’ embittered stings.
And through us all Nirvana’s current ranged.

This final view of the passengers (and their bones as dust) appears to be what the makers wanted to be true to.

From the poem and operetic adaptations Aniara is an epic of extinction, inspired by Martinsen gazing up at the Andromeda galaxy through a telescope one exceptionally clear evening in 1953, shortly after the Soviet Union conducted their first H-bomb test. He experienced sensations of being on a spaceship. I think if you asked this question of Harry Martinsen at the time he wrote it, the answer would simply be, no.

There is a bit of confusion about the clip in question, as it may not be included in every releases of the film. Directors had commented that a different US release was made because the original showed an erect penis, which could not be released in the US. And the following review of both the opera and the film seem to conclude that the clip in question is not shown in the main release:

The film comes nearest to the original's poetic force in its final scene, in which the image of the Aniara as a galactic sarcophagus is fully realized, all life within extinguished, still light-years distant from Lyra.

They were obviously reviewing a different release of the film.

Concerning the modern film adaptation and the clip in question - as seen in the US - what is currently available from interviews and reviews seem to be conspicuously silent about that except for Variety magazine which obliquely calls the ending "a cryptic, ironical fadeout." This implies at least one reviewer considers the intent to be somehow ironical. Did they imagine that had the passengers not given up hope, they - or their species at least - would be OK? I take that interpretation with a grain of salt given the span of time they would have had to endure, and the finite amount of energy this sunless voyage afforded them. The intent of the film was very clear to me that humanity at least would end. It remains an extinction event; nowhere to go to, and nowhere to return to.

But the fact does remain that the poem ends in complete endless drifting, and the film included that clip, for one reason or another, and that clip is never once even spoken about on the Internet. At this early point in the film's life cycle we only have deductive reasoning.

The film industry in general does not like dead ends, as director Pella Kågerman notes in an interview with Cautionspoilers.com last month. When asked why this classic story has not been adapted to film before, Pella responded:

Pella: I think because it is so dark, it’s hard to get money for it, so we had to work a lot with hope. The only demand that the daughters of the writer had, was for us not to change the ending.

At one point we actually pitched this film in Hollywood for a famous agent and he was following the story until we came to the end, where he was like, “But one survives…”

SARAH: They’ll always say you’ve got to have a survivor, or a dog survives, or something like that.

So there was certainly pressure for this adaptation to carry something forward, if for no better reason than to make room for a sequel (pronounced: $$$$). As mentioned earlier, this film is young, and the social pressure to remain true to Martinson's theme are very compelling. Putting down in ink that you just made a movie about the cycle of life would be tantamount to sacrilege.

There are other interpretations which share the sense that the story at least deserves a cycle rather than a finality:

A contemporary adaptation of the poem - which is in fact 103 poems, or cantos - was conducted by The Crossing Choir which notes a connection between the Matteson story and Asian mythology, and choreographer Antti Silvennoinen

Taoist practitioners believe in a circular "path of return"—a movement from the myriad things of the world back into wuji. The Immortals, or those who have entered the Tao, are those who have completed this "path of return." A Taoist interpretation of the poem would be inclined to extend the poem's forever drifting toward Lira out to arriving at Lira, and a circular path from the manifest Taiji and the unmanifest Wuji, via the mechanism of Taiji, and then back in the definitive yin and yang cycle enveloping all things.

If this final scene depicts panspermia, it would the accidental panspermia proposed in 1960 by astronomy professor Thomas Gold. What arrived in Lyra may well have contained viable Earthly microorganisms. According to Wikipedia there are documented viable Earthly bacterial spores that are 40 million years old that are very resistant to radiation, and others able to resume life after being dormant for 25 million years,

So no canonical answer agrees that the clip in question had the intent to convey panspermia, and even if it were true no such agreement will likely be printed; modern science does not reject the possibility that accidental panspermia would be the outcome of this version of the film.

Not the answer you're looking for? Browse other questions tagged aniara or ask your own question.

1
What was the point of the 'Spear'?
1
Is there a clear explanation why the ship could remain viable for years when the trip was planned for 3 weeks?