What was the point of the 'Spear'?

Around halfway through the film, the ship encounters a 'spear', a long cylindrical object moving on a parallel trajectory to the Aniara, at a marginally higher speed. The captain and senior crew seem convinced that it's a probe sent from Earth and likely containing fuel rods.

the probe proves to be made of an impenetrable element not on the current periodic table. We see attempts to cut it with drills, blowtorches and lasers and scanned it with with geiger counters, x-rays and electron microscopy to try to find out what's in it. At the very end of the film we see that they've even tried explosives to get into it, all to no avail 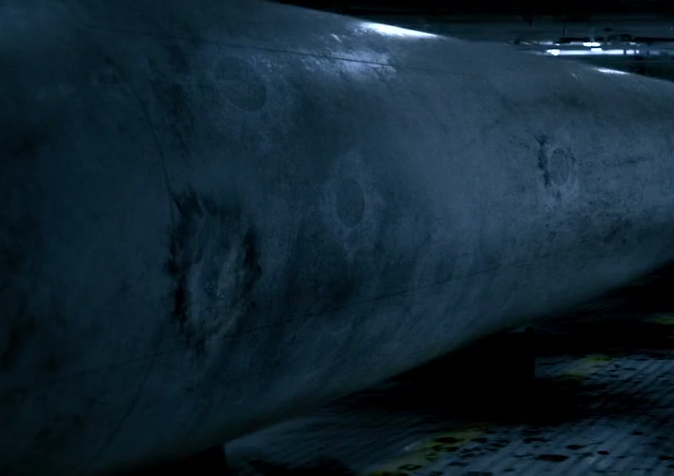 So what is the 'Spear', who sent it and why?

If you go to the original poem, the spear appears in poem 53.

As in the movie, it is travelling in the same direction, but in the poem it is moving faster and the encounter is brief. There is no answer as to what it is or where it came from - the text is explicit that there is no answer to the question:

But no one knew, and nobody could know.

Some tried to guess, but nobody believed.

It has an impact on the way people think:

But nonetheless this vision had

the power to alter many people’s brains:

Three went mad, one was a suicide.

And still another started up a sect

Assuming the movie follows the poem in intent, the spear has no meaning in and of itself; it's narrative purpose is to change how people (those on the ship, and the reader/viewer) think.

I really thought about the spear a lot. It bothered me at first but I've come to believe it was an important focal point for the message of the movie. I feel like Aniara was a study on how we believe everything is for us and within reach if we will only try to grab it - we have a hard time coming to peace with the fact that this isn't true.

If you consider my statement above and consider history "grabbing the spear" and using it has literally been what we've attempted to do since our ancestors first adopted the use of tools. To "take the spear" is to commit a tool to action in our own interests.

Here are my two theories about "what the spear was":

My impression was that it must be of alien origin since our ravaged solar system could not have produced such advanced technology in the few years since Aniara went off course. My assumption was that this probe made it safely to the new system, unperturbed by the humans’ attempts to penetrate it, and was able to complete its mission on behalf of a less self-destructive species.

Clearly the probe that was intercepted was not of earthly origin and was on the same flight path towards the earth like planet. The probe’s intent was calculated panspermia but was intercepted by the crumbling Aniara. Not only did aniara defeat themselves but also another civilizations attempts to recolonize. I suppose maybe the probe could break free of the aniara but it is unlikely. Two civilizations met their fate searching for a new home.

Not the answer you're looking for? Browse other questions tagged movie aniara or ask your own question.

17
What was the First Science Fiction Film?
13
What was the original ending to Enemy Mine?
19
What was the point of bringing Enterprise to the surface of a planet?
4
Why did the Rohirrim throw his spear?
7
What was considered the Judge's secondary weapon?
5
Sci-fi/fantasy novel where at some point the ship enters a “time warp” where everyone ages rapidly
3
How fast did the Aniara travel?
1
Is there a clear explanation why the ship could remain viable for years when the trip was planned for 3 weeks?