I remember at some time in the mid-90's getting a book from my local library where part of the story was a young person, (possibly teens, and I think male), being taught by an elder (maybe human, maybe dragon?), how to transform into a dragon using the blue 'leylines' they can see when they close their eyes and concentrate on them floating above the ground (the lines).

This wasn't the main part of the story I think, I think they were having to get to somewhere and he needed to learn this for whatever they were going to.

That's all I remember of the book as when I finished it it went back and I started reading other books by Tom Holt and Robert Asprin, and when I wanted to find another book in this Dragon series (if there was one), I couldn't remember who wrote it or what it was called.

This is something of a guess, but I wonder if this is one of the Dragon Nimbus novels by Irene Radford. 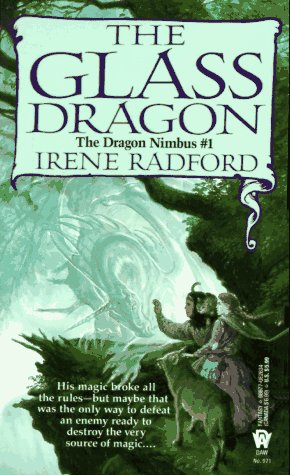 The Glass Dragon
In a realm that has always been protected by its magicians, a kingdom whose ruler's life and power is inextricably linked with that of the dragons, a time of crisis has arrived. Someone is killing the dragons, and as their numbers diminish, magic is fading from the kingdom of Coronnan. The kingdom's unlikely saviors are a young wizard whose magic is completely unorthodox and an equally young witchwoman who has been befriended by the last of the dragons.

The Perfect Princess
Though rogue magic has long been banned in Coronnan, the loss of dragon magic has opened the way for masters of these forbidden spells to wreak havoc on the kingdom. Only if Prince Darville can tame the forces of magic and rescue the spell-trapped princess who is fated to be his bride, does he have any chance to save crown, kingdom, and dragons.

The Loneliest Magician
As war rages between the armies of Coronnan and SeLenicca, an equally desperate campaign is being fought between the Commune, which uses dragon magic, and the coven, which draws its power from an older, darker source. The only hope of saving Coronnan, the king, and the Commune lies in finding the dragons and bringing them back. A young orphan is being called by the dragons, lured with the promise of discovering his true identity. Can an untested youth venture into the heart of the enemy's stronghold and find the means to set the dragons free?

I have this omnibus edition of the the first three novels, though it's been a long time since I read it and I don't remember that much about it. However it does have blue ley lines (that exact phrase is frequently used in the novels) that are lines of power associated with dragons. The first book was published in 1994 so it matches your time frame.

If I have got the correct book then the young man is a kitchen boy who has no name - he is just called Boy throughout the book. His tutor is a magician called Baamin. It is Boy who finds the blue ley lines and shows the other magicians how to use them.

Not the answer you're looking for? Browse other questions tagged story-identification novel dragons or ask your own question.

5
Story ID from an in-text poem about dragons
10
Looking for fantasy fiction novel series with a male witch and dragon
12
Fantasy novel with cover image of a dragon rider wearing a gas mask
6
Novel where a young boy discovered a baby dragon on the corpse of its mother
13
80s or 90s Fantasy novel, part of series. Castle talks to wizard, 2 headed dragon fights itself