Why was Luis' van stored under Scott's name at the storage facility?

In the post five-year future of Avengers: Endgame, we see Luis' van at a self-storage facility behind a metallic fence with a label named "LANG": 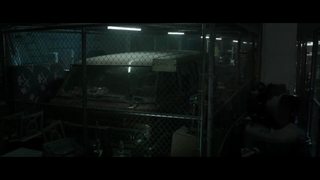 Considering what we see in Ant-Man,

It is clear that Luis owns the van. And according to the records, Scott Lang was missing and presumed to be dusted (as his name was found at the memorial at San Francisco).

So why was it stored under Scott's name at the storage facility?

Because the van was likely "sold" to Scott as the founder of X-Con Security Consultants considering it was their property now. You can see the logo for X-Con on the side of the van when Scott goes into the Quantum Tunnel at the end of Ant-Man and the Wasp and it's also visible when Scott goes up to Avengers HQ in Avengers: Endgame as we see in the security footage

As no one was there to collect the van after the Snap presumably Luis and the rest of the team were also dusted but I can't find any information on this either way. Though again it makes sense else they would have likely let Scott out sooner. As no one was there to claim the van it would have been stored under the registered keeper's name for collection if and when they turned up.

It’s also worth noting, as Valorum mentions in the comments, that post-Snap there would have been thousands of abandoned vehicles that needed clearing up. There may not have been time, or need, to want to find their proper owners and so authorities probably went with whatever documentation they found in the vehicle, for example, a driver’s license.

Not the answer you're looking for? Browse other questions tagged marvel marvel-cinematic-universe avengers-endgame ant-man-2015 or ask your own question.

13
Why does Tony Stark ask to recalibrate the ISDN on the mobile van?
47
How long was Doctor Strange in training under the Ancient One?
1
Why was Hela’s name changed?
8
Was Janet Van Dyne actually visible in the first MCU Ant-Man movie?
3
How many names appear on San Francisco's Wall of the Vanished?
2
How does Luis pick up the van?
29
Why does the Quantum Realm behave different for Janet van Dyne than for Scott Lang?
9
Why were the Infinity Stones powerless in the Time Variance Authority facility?