What fantasy book has twins (except one's blue) and a cloaked ice bear on the cover?

I remember only the cover of this book. A fantasy novel released before 2007. The cover of the book had a twin pair where one of the twins were blue, and if I am not mistaken, there was an ice bear wearing a kind of cloak in the background... sorry I do not have much more to offer

I think you're looking for the Phenomena novels by Ruben Eliassen. 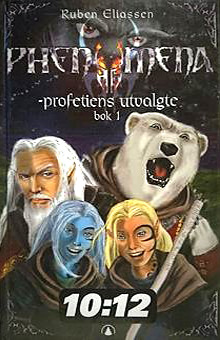 Phenomena is a series of Norwegian Young Adult fantasy books written by Ruben Eliassen. The series follows the elf boy Alk and his twin sister Ilke, which according to an old prophecy has the power to defeat Tarkan, the fürst of darkness, and by that free their world from his evil regime.

The series takes place in Aldra, a country in the world Erda, controlled by the Sherpa, the Dark Lord and his evil forces. The elves are slaves by Tarkan's servants the mortoks but two elves, Harti and Khiri, manages to bring their newborn children out of captivity and to the wise vizard Sha-ra's Castle. Here will the children, the twins Alk and Ilke, raised in freedom. It turns out that Sha-ra knows an ancient prophecy, recorded in the Phenomena; the book of visdom. The prophecy says that two elf children will rise up and fight Tarkan on the Gredom fields. These two children are Alk and Ilke, and they go out to fulfil prophecy and defeat evil.

Throughout the series, we follow Alk and Ilke and their adventures leading up to the unavoidable battle that will decide the fate of the world. In addition to the twins, we also get to know their adoptive father Sha-ra, their big brother figure Arol, Jolsah the mortok prince, Azur an escaped slave, and Millian who have been transported to Aldra from our own world and many others.

This may not be what you're thinking of, but as we don't have any details of the plot, this reminds me of a Magic Tree House book called Winter of the Ice Wizard:

Merlin the magician and Morgan le Fay have disappeared, and in order to find them, Jack and Annie journey with their friends Teddy and Kathleen to the Land-Behind-the-Clouds, a frozen kingdom of ice and snow. There they must overcome their fears and solve the Ice Wizard's riddle, because if Jack and Annie don't complete their mission in time, Merlin and Morgan will disappear forever! 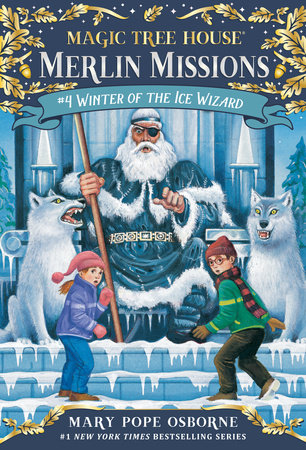 They're not actually twins. Jack is Annie's older brother and the thing wearing a blue cloak in the background is not exactly a bear, but looks like one; he's a wizard. Also, this book was released in 2004. This seems to match some of your description.

10
What was that Sci-fi book mixing classic art and book excerpts to build a timeline of the universe?
4
What book had a Japanese title, a futuristic samurai head on the cover, and spelled America “Amerika”?
9
What book has a farm girl harvesting the power of unicorns?
12
'The talking head' fantasy book with a girl on a quest with a severed head and a sassy crow
9
Book where the memories/lives of adults are implanted into teenagers
9
Choose Your Own Adventure type gamebook about a knight vs a demon