Graphic novel from 2014 or later with a time traveling device

I read this graphic novel two or three year ago at a Barnes and Noble. It was a newer comic—2014 or later, but not much earlier, I believe.

It centered around a man who makes a time traveling (interdimensional?) device, which is basically a giant rusty metal man, I believe, to try to save his beloved from the leader of these evil shadow creatures called morlochs/morlocks. It's set in an old -timey kind of world, kind of steam-punkish. I do believe however it is heavily based on parts of The Time Machine by H.G. Wells.

I believe he initially builds the giant metal man as some kind of attraction of some sort, and then maybe discovers some kind of mystical properties via alchemy/science/Native American lore. Other than that I'm not sure. I know that he has a crew of three maybe four other people who ride inside the giant metal man's head/chest and one of the is a Native American named "Hawk" or "Crow".

I also know that he somehow

is the head evil morloch demon (you learn he's the reason or cause of all his problems with her)and he's stuck in this never ending loop for messing with time or something like that.

Other than that, all I can recall of the cover or name, I believe it showed the inventor and the giant iron guy and maybe his crew. And for some reason I keep thinking that the name is like the iron Man or the iron fist or steel head or metal tophat ... something that has to do with metaI, but I HONESTLY don't know that for certain at all. Please help. thank you

I know that this sounds very similar to HG Wells The Time Machine graphic novel, but, it is not.

I THINK it was a one off and not part of a series but I'm not sure. Maybe the publisher was Dark Horse or Icon (nowhere near sure).

It took me all day but I found it. I had read the first issue of this series in a preview a few years ago so when I saw your question I immediately recognized that I had seen the source material - but had no idea what it was called, where I had seen it, or how to find it.

The Steam Man 5-issue miniseries from 2015 by Dark Horse.

Enormous steam-powered robots march across the Great Plains of the old American West, protecting the populace against invading aliens and monsters! The Steam Man and his operators seem to have their task well in hand, until a crazed and powerful vampire comes to town intent on bringing forth the apocalypse! 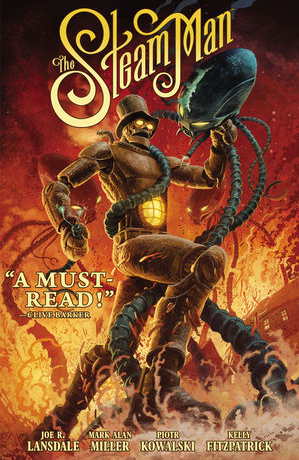 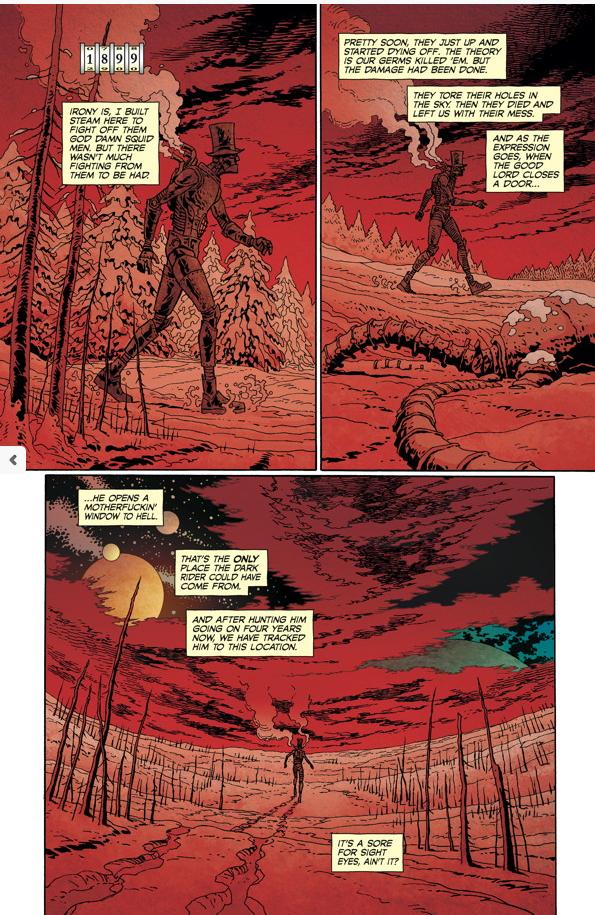 The comic is based on a 1999 short story by Joe R. Lansdale

The traveler from HG Wells' The Time Machine.

at least in the story (which I haven't read).

You were right about the supporting cast: 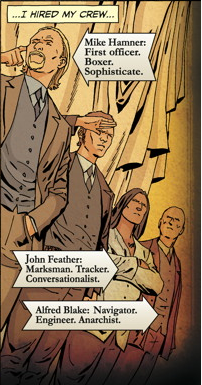 Actually, just about every single thing you mentioned in your question was dead-on; it was just the content itself used such common terms that it was a huge pain to find.

For the record, the search term that finally yielded results, after I tried endless permutations throughout most of today was:

..which turned up this gem as the 5th result:

..which contained the listing describing the comic you were looking for.

I am thrilled that I'll be able to sleep tonight.

Not the answer you're looking for? Browse other questions tagged story-identification comics time-travel the-time-machine or ask your own question.

16
Could H.G. Wells "Time Machine" travel to an obstructed destination?
14
Book about a time-traveling dinosaur hunter
5
Graphic novel where the cover had a short blonde woman kissing a tanned man with mechanical parts coming out of his head
11
Graphic novel involving xenoforming of Earth by a malicious intelligence
5
Movie: in a big seaside city time travel portals open to the apocalyptic future with the fading sun and zombie mutants
9
1960s comic book/graphic novel-type format maybe: Boxer takes too many weight-gain pills and sinks underground?