I am looking for a live action film on full body transplantation. I have only very vague memory of this film, so I'm unsure about most of what I say here. I am only sure about two details that really stuck out and made this film unique.

I saw a segment of this film on TV in Hungary, probably some time between 1995 and 2006. The dialog must have been in Hungarian, but I don't recall if it was original or dubbed. I don't think I saw the entire film, so I don't know how it ends or how it starts. The film may have been from the 1980s or even older.

A mad scientist surgeon and his small team of assistants perform full body transplantation operations on humans. This was shown in a science-fiction way, with no supernatural fantasy elements. The film showed an operating room like you'd see in a hospital, where the surgeon and his team removed the brain from the patient's skull, inserted it to the host body's skull, and reconnected the nerves to the new body.

The people who gave the new host bodies were kidnapped, and operated on unwillingly. Perhaps the patients were rich people who would pay for that illegal service. (Update. On further reflection, I think the paying customers weren't aware that they were transplanted to another person's body, they were only told that they got a miracle aging cure.) The part that really made this memorable is that the victims who provided the unwilling host bodies weren't killed, instead their brain was transplanted into great apes, and then the apes kept in a cage, presumably in the laboratory. The victims couldn't speak as apes, and so few people would suspect that they were humans inside, thus making their situation hopeless. I think that one of these victims was the protagonist of the film, male, and his lover somehow met him and recognized him even though he was in an ape's body.

I tried to look TVTROPES WARNING on the TvTropes page for the trope "Grand Theft Me*, which seems to be the most relevant trope for this, but nothing in the "Films — Live-Action" section seems to match.

There's a chance this could be The Immortalizer (1989). According to IMDb there does appear to be a Hungarian translation/version known as Halhatalan.

A crazed scientist sends out his mutant creations to kidnap young, beautiful men and women to bring back to his lab so he can replace their brains with those of old, wealthy people.

Whilst it doesn't have apes in it, the rest seems to match. And the "mutant creations" could be mistaken for apes as they do change somewhat and don't appear to be able to talk. I haven't found the ending to be able to see if that matches but the rest lines up pretty well. The first 40 or so minutes are also available on YouTube, with the first part being below. Warning some parts are NSFW.

This somewhat detailed review also has an image of the operation in it which matches your memory. Hidden behind spoiler tags because it is a bit gory so might be NSFW. 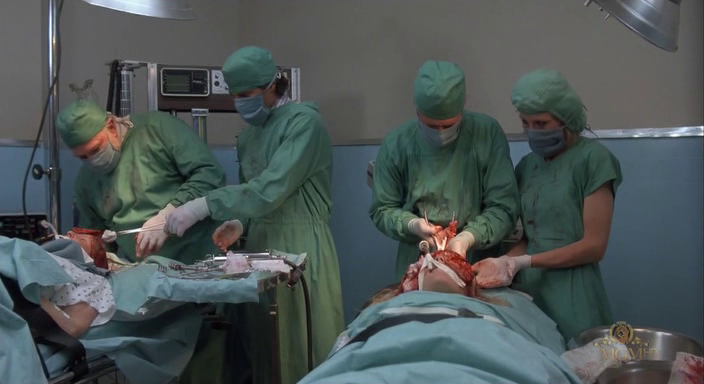