I've been to a couple of subreddits already trying to identify this movie, but I've had no luck besides one person who vaguely recognized the plot, but didn't know the name.

I watched a movie at some point in recent memory, most likely the last few months, but I don't actually know what time period the movie is from, although I suspect it's newer (2017-2019). I'm not sure what platform I watched the movie on, though my Netflix history doesn't show anything matching the description so far, and I can't get access to my PLEX viewing history (I'm not the admin).

Anyway, what I remember of the plot is this... there was a woman who had trained her whole life to be an astronaut, and was given command of a mission. She was in maybe her late 20s to early 30s and I believe had dark hair. However, once she and her crew reached orbit, she began to act confused and erratic, claiming to not know what was going on. It was revealed that she had a rare brain disorder that caused her to experience memory loss in space, and as a result, they had to abort the mission, and it destroyed her career.

I'm not entirely sure, but I believe she may have gotten pregnant afterwards, but ultimately I believe she ended up killing herself.

That was not all there was to the plot, as I believe this was only the first 10-20 minutes of the movie, but I cannot for the life of me remember the rest of the plot or what the name of the movie was. I've had my doubts about whether it was a movie, but I'm 99% sure that it was.

Some of the common suggestions were:

Predestination, however, this is not possible, as the reason for the main character's ejection from the space program wasn't because they had memory loss, but because

it was a women's only program and she was discovered to be intersex.

There have been no replies yet to my /r/scifi post, though.

I only managed to get through the first couple of episodes, but this sounds like the Netflix/Amazon Prime series Extant staring Halle Berry.

Molly Woods, an astronaut with ISEA (International Space Exploration Agency) is assigned a 13-month solo mission aboard space station Seraphim. She returns home to her husband John, a robotics engineer who created their son Ethan, a prototype android called a "humanich". When Molly discovers that she has mysteriously become pregnant despite years of infertility, she begins a search for answers.

While memory loss isn't explicitly mentioned in the premise, obviously being pregnant and not knowing why suggests some sort of memory problem.

By episode 3 it's shown that her young son is a robot (she knows), in case that helps place the show for you.

The IMDB links may jog your memory. 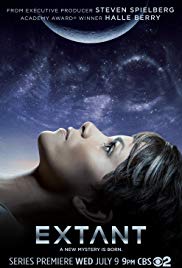 Halle Berry obviously has dark hair. Marketing for the show and the fact it was a box set full release dump may have made it feel like a movie to some viewers, particularly if they didn't stick it out to the end.

16
Movie featuring space crew, murders, a forbidden door and ending with a revelation
16
Early 90s sci-fi movie very similar to Star Wars with lightsabers and laser guns
9
Looking for a space epic where the main characters are an A.I. and a woman
6
French sci-fi movie from the 1970s, space scenes filmed underwater
9
Movie about a woman and her young daughter; a person they know killed her in her past life
11
Novel about 'magic' on the moon where a woman loses her memory when a silver needle is inserted into her head
13
Movie where a man transforms into a woman in space