Where did they get the name for Star Trek’s Q?

What inspired the god-like being Q introduced in Star Trek:The Next Generation Encounter at Farpoint? Where did the show's creators get the name and inspiration for Q's character?

The character Q played by actor John de Lancie in the character's debut in the Star Trek:The Next Generation pilot, Encounter at Farpoint was inspired by a long-time British fan of the franchise named Janet Quarton. In the early 1970's Brittain there were only a few fan followings available and all seemed to fall short of the enthusiasm Ms. Quarton had for the show. She recalls in issue #100 of her newsletter that

When I found out about Star Trek fandom in 1972 there was only one specific Star Trek club in Britain: The Star Trek Correspondence Club run by Audrey Baker. There was also The William Shatner Fan Club and The Scottish Society for Leonard Nimoy Fanatics

~ A History of Star Trek Action Group by Janet Quarton 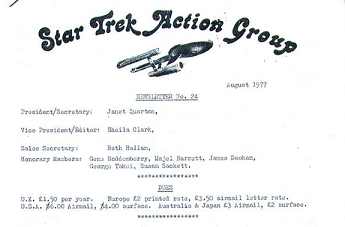 The fan club was originally started after Star Trek: The Animated Series began releasing in 1973. The idea started with Jenny and Terry Elson who were attempting to raise money for a full-fledged British Star Trek fan convention. That newsletter was called the Star Trek Con for Britain Action Group, and Janet became its second member, and then its first president, serving in that role for 8 years.

I joined STAG as soon as I saw it advertised and was always proud of my membership number -- no. 2.

As the club was designed to do, it was incredibly successful in funding and launching the first ever British Star Trek fan convention on September 28 & 29 in 1974. Her guests of honor were Scotty (Jimmy Doohan) and Sulu (George Takei) at the Abbey Motor Hotel in Leicester.

In 1977 Gene Roddenberry, his wife Majel, and their young son were in Great Britain filming Spectre and on February 1st, Mr. Roddenberry called Janet asking for her and 50 fans to join him at the set.

In 1978 Mr. Roddenberry sent Janet a telegram announcing that the whole cast was getting together again for the production of Star Trek: The Motion Picture. This gave her controlled inside information making her newsletters and zines immensely popular.

Janet went on to raise money for conventions while also donating a portion of the proceeds to charities. Notably, at the 1981 Stag Con which she organized they raised £1200 for the Guide Dogs for the Blind Association, and adopted a guide dog named Quanta.

In considering production for the Star Trek: The Next Generation Gene Roddenberry gave the protagonistic omnipotent character the name Q in honor of his loyal fan and her unearthly powers to promote the franchise in a new market.

Not the answer you're looking for? Browse other questions tagged star-trek star-trek-tng star-trek-voyager inspiration or ask your own question.

-3
Why is her name Michael in Star Trek Discovery?