In Batman Vol.7 Issue#.48, the Joker takes everyone at a church wedding hostage and kills them one-by-one. And just a few moments before Batman arrives at the scene, the Joker is seen casually singing "na na na na na! Batman!!" as a sort of welcome song for Batman. 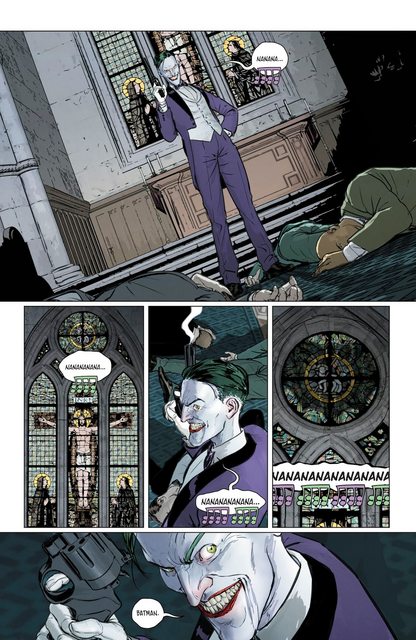 Judging by the lyrics, this is very similar to (or dare I say, the same as) the famous title track of the 1966 Batman TV series by Neal Hefti starring Adam West.

Or does the song "Na na na na Batman!" actually exist in the DC comic universe/multiverse?

Browse other questions tagged dc comics batman or ask your own question.

35
Does Batman whisper/change his voice in the comics?
7
In which Comic Book series is Batman actually Thomas Wayne?
10
What does Wayne Enterprises produce in the Batman comics?
4
Which Batman comic had the Joker trick a man into thinking he was ugly?
14
What comic books exist in the Marvel Cinematic Universe?
11
Does Batman ever say "Because I'm Batman" in-universe?
2
Identify a comic where Bruce Wayne did not change to Batman throughout the issue
17
Looking for a Batman Comic where Batman had real wings
11
In which comic does Batman travel back in time to the night of his parents’ murder?