What's the origin of the trope that dragons used to be common but aren't any more?

It's common in fantasy stories for dragons to be formerly common but rare or extinct by the time of the story, for example, in Discworld, Game of Thrones, and perhaps The Hobbit (I can't recall enough about Smaug to be sure).

Where did this idea come from? Is it known in any old mythology?

The idea that dragons were once numerous, but are no longer, is just one of many manifestations of what TV Tropes calls the "The Magic Goes Away" (named for the Larry Niven story). It is really one of the most common and fundamental tropes in fantasy—that the world of the past was more magical and fantastical than the world we live in now—and it traces its origins back to ancient myths.

Quoting from myself here:

The idea that magic was much more plentiful in the past is very common, both in fantasy fiction and mythology. It makes sense that myths would tend to develop this way. While there are things in the everyday world that seem magical in varying degrees (earthquakes, lightning, the bodies of the heavens), the physical forms of gods are conspicuously absent. So there is posited (either implicitly or explicitly) to have been an age where magic was more common, and the gods were closer. There might or might not be a new age of magic coming in the future, perhaps at the end of the universe.

Fantasy writing, including my own, tends to follow this formula. One reason for this is that it’s familiar from myths and folklore; it’s been a convention of the fantasy genre before the genre even existed as such. Another reason is that fantasy is often set is a world that is supposed to approximate some epoch of Earth’s past—culturally or technologically. If too much magic was available, it would change the setting drastically.... Yet a writer generally wants there to be enough powerful magic to tell a good story. A natural way of resolving this tension is if powerful magic exists, but it is hidden away; and even if it is uncovered, it cannot be duplicated.

Some authors have thought through the implications of the gradual decay of magic rather carefully. Others tend to accept it as a part of the standard fantasy setting without much explicit discussion.

Regarding dragons specifically, a very early example is from the Old English epic poem Beowulf. The last of the three monsters the hero Beowulf fights (after Grendel and Grendel's mother) is a dragon. The dragon has been sleeping for ages—implicitly since a time when dragon depredations were a more usual occurrence—when its sleep is disturbed by the theft of a golden cup from its ancient horde, and arises to lay waste to the countryside. The narrative compares the challenge of Beowulf's winged fire drake to earlier feats, specifically the slaying of the wyrm Fafnir (by Sigmund, according to the Beowulf, although in other sources the deed is more usually attributed to Sigmud's son Sigurd/Sigfried). Thus Beowulf's final victory, over this scaly relic of a former age, is compared to the deeds of the even older epic heroes of Germanic mythology, who were directly descended from the gods themselves.

I think this is inspired by real life.

Consider that where I live — the island of Ireland — was once a habitat for elk, wolves, wild cows and many species of deer.

Over the last thousands of years they have been killed off, or couldn't adapt to environmental changes.

The wolves were common in Ireland in the 17th century (see Wolves in Ireland) and my grandfather once dug up a partial antler from Great Irish Elk in a peat bog.

These creatures no longer exist, but occasionally their remains still come to light. 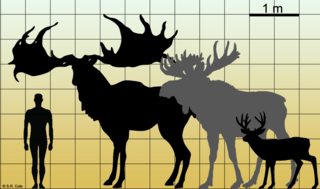 For me it's simple extrapolation that people find the remains of large animals, or fossils of them, and see that those animals no longer exist in their area.

Add to that the tall tales, the man who survives a wolf attack, it was never a small wolf, like the fish that got away it's size will grow each time the story is told, until it's the size of the dire wolves of old come again.

Fathers, bringing their sons wolf hunting, try to put a bit of heart in the boys by telling them "these wolves you get these days, they're nothing like the wolves we got when I were young, sure my grand father killed a wolf taller than he was with nothing but a stone knife and his own bare hands!"

All of these things add to the impression that the world has diminished from how it was in the days of our ancestors.

Further reading of Dragon (Wikipedia) has unearthed (emphasis mine)

Nonetheless, scholars dispute where the idea of a dragon originates from and a wide variety of theories have been proposed.[8] In his book An Instinct for Dragons (2000), anthropologist David E. Jones suggests a hypothesis that humans, just like monkeys, have inherited instinctive reactions to snakes, large cats, and birds of prey. He cites a study which found that approximately 39 people in a hundred are afraid of snakes and notes that fear of snakes is especially prominent in children, even in areas where snakes are rare. The earliest attested dragons all resemble snakes or bear snakelike attributes. Jones therefore concludes that the reason why dragons appear in nearly all cultures is because of humans' innate fear of snakes and other animals that were major predators of humans' primate ancestors. Dragons are usually said to reside in "dank caves, deep pools, wild mountain reaches, sea bottoms, haunted forests", all places which would have been fraught with danger for early human ancestors.

In her book The First Fossil Hunters: Dinosaurs, Mammoths, and Myth in Greek and Roman Times (2000), Adrienne Mayor argues that some stories of dragons may have been inspired by ancient discoveries of fossils belonging to dinosaurs and other prehistoric animals.[14] She argues that the dragon lore of northern India may have been inspired by "observations of oversized, extraordinary bones in the fossilbeds of the Siwalik Hills below the Himalayas" and that ancient Greek artistic depictions of the Monster of Troy may have been influenced by fossils of Samotherium, an extinct species of giraffe whose fossils are common in the Mediterranean region. In China, a region where fossils of large prehistoric animals are common, these remains are frequently identified as "dragon bones" and are commonly used in Chinese traditional medicine. Mayor, however, is careful to point out that not all stories of dragons and giants are inspired by fossils and notes that Scandinavia has many stories of dragons and sea monsters, but has long "been considered barren of large fossils

No, really. Do you really think we were the first to unearth dinosaur bones and wonder WTF they were? Of course not. When your culture unearths the bones of several gigantic reptile-things and you only have hearsay of anything like that existing today, it's difficult not to make the assumption that these things were once plentiful and are either extinct or in very short supply.

To add a venerable precedent, in Jonathan Swift's Gulliver's Travels he arrives in Brobdingnag, land of giants. Those giants are convinced that they are the degenerated (in the physical sense) descendants of even bigger giants (of which they have found the bones1), and Gulliver speculates that men may be in turn the degenerated descendants of the inhabitants of Brobdingnag.

1And the reference to bones links to Carduus' observation that way before the theory of evolution was established the people realized that really big beings lived on Earth.

Not the answer you're looking for? Browse other questions tagged history-of dragons or ask your own question.

8
Where did the notion that Dragons could speak originate?
5
What was the first story to feature stopped time?
7
Romance book about a shapeshifting unicorn and a shapeshifting dragon
41
Why did J. K. Rowling choose to downplay dragons?
15
What is the origin of the “clerics can create water” trope?
51
What is the earliest instance of "Dark Elves" in modern Fantasy?
3
Which was the first fantasy story to feature human-dragon hybrids?