Why is her name Michael in Star Trek Discovery?

I see several explanations online, what was the true inspiration for the character's final production name "Michael Burnham?"

Star Trek: Discovery's lead female role was initially announced under the pseudonym "Commander Rainsford" but somehow that was changed. What’s behind the new character name Michael?

This was addressed in an interview with Discovery showrunner Aaron Harberts.

All right, so here we go. We've worked on a number of Bryan Fuller shows… Wonderfalls, Pushing Daisies. Many of his female protagonists have typically what you would call male names. Chuck was one. Jaye was another. When we all sat down, of course, the idea was going to be that she was going to have a male name, or typically male name. We were just pitching around the writers' room. We had a couple on the board and I said, "Well, how about Michael?" Because I had remembered a gossip columnist in Chicago. I used to work in Chicago in publicity, and Michael Sneed, she wrote for the Chicago Sun Times. Then, there was the bass player for The Bangles, a musician named Michael Steele. I'd always thought that the name Michael was just really cool and different. We pitched that to Bryan and he was like, "Let me think about that." That's how we seized on it, but I think it's a really cool name, and maybe we'll see some more women Michaels. Who knows?

Obviously, in-universe her father's name is Michael Burnham, so giving her a name after her father wouldn't be an especially odd thing to do, even if it's not the most usual name for a female child. You may note that other individuals have had traditionally female or male family names throughout history.

The lead character for Star Trek: Discovery was originally named "LCDR Rainsford" and it was decided that she would only ever be called "Number One" in honor of the First Lieutenant on Captain Pike's Enterprise, who had no name in the original series.

In an interview with Denofgeeks.com Sonequa Martin-Green reveals there are three reasons driving the decision to change her character's name:

In the finale her character is traveling through time, saving the galaxy in a superpowered angel suit. 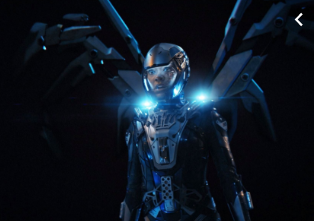 She states in her interview:

Aaron [Harberts] also speaks about parallels with the archangel Michael, and then once it filtered down to me, I realised that I needed to incorporate it into my life.

I got really incredible feedback from the producers when I decided that I was named after my biological father. What I love about that is that, in the future, there is such gender fluidity that a girl can be named after her dad and perhaps a son named after his mother. So I love how it turns into this beautiful, poignant yet very quiet political statement.

Out of universe the second and third motivations tie together very closely. The imagery of Michael the Archangel having a female name would be contradictory, as angels have no gender in the Christian faiths. A female angel bearing a male name is consistent with the gender fluidity associated with angels.

Characters in Star Trek have often been inspired by a wide variety of sources; such as the super-powerful character Q named after a devoted fan, or being named for a simple word as was the case with First Officer Una. In this case, these are the three main reasons Discovery's female lead is called Michael.

Not the answer you're looking for? Browse other questions tagged star-trek star-trek-discovery inspiration michael-burnham or ask your own question.

74
Who or what inspired the character Geordi La Forge?
7
Does Christopher Pike's first officer have a name?
-3
Where did they get the name for Star Trek’s Q?