Asimov's story where a man's speech contains no information

I am trying to remember the name of a tale or novel by Isaac Asimov. I am positive I've read this some years ago, but for the life of me, I can't recall the name.

In the story, one of the characters, some kind of diplomat, speaks profusely. Only after recording and analysing his speech, the main character(s) come to the conclusion that there is no actual information to all his verbosity. He was a master at speaking without actually saying a thing.

This is the Foundation classic. 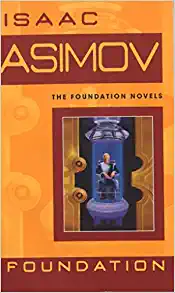 In a comparative article The Art of Saying Nothing the author recounts Asimov's Foundation exactly as described:

In the Isaac Asimov sci-fi classic Foundation, an envoy from the Empire arrives for 5 days of talks to promise a small planet Imperial protection against attack. Scientists at the Foundation then use symbolic logic to analyze the Imperial envoy's transcript, and reach this conclusion -- real guarantees of protection: zero; content of 5 days of talk: zero.

The interaction you recall is included below:

“But then,” interposed Sutt, “how would Mayor Hardin account for Lord Dorwin's assurances of Empire support? They seemed” he shrugged “Well, they seemed satisfactory.”

Hardin threw himself back in the chair. “You know, that's the most interesting part of the whole business. I admit that I thought his Lordship a most consummate donkey when I first met him – but it turned out that he is an accomplished diplomat and a most clever man. I took the liberty of recording all his statements.”

There was a flurry, and Pirenne opened his mouth in horror.

“What of it?” demanded Hardin. “I realize it was a gross breach of hospitality and a thing no so-called gentleman would ever do. Also that if his Lordship had caught on things might have been unpleasant; but he didn't and I have the record and that's that. I took that record, had it copied out, and sent that to Houk for analysis, also.”

Lundin Crast asked, “And where is the analysis?”

“That,” replied Hardin, “is the interesting thing. The analysis was the most difficult of the three by all odds. When Houk, after two days of steady work, succeeded in eliminating meaningless statements, vague gibberish, useless qualifications—in short all the goo and dribble—he found he had nothing left. Everything canceled out. Lord Dorwin, gentlemen, in five days of discussion didn't say one damned thing, and said it so that you never noticed. There are the assurances you had from your precious Empire.”

Not the answer you're looking for? Browse other questions tagged story-identification isaac-asimov or ask your own question.

5
SF novel featuring a ship called Kraftwerk II
3
Virus replicating through signals to civilizations
6
Trying to identify a short story of missed opportunities
4
Help identifying a story where kids discover some kind of wormhole in a garden
12
Book about ancient Martian astronauts being the root of modern humanity and time travel
7
Did Isaac Asimov give two or more unrelated characters the same name component in any of his science fiction stories?
5
Parallels between Asimov's Foundation characters and real historical figures
7
A paperback collection of letters between Isaac Asimov and Arthur C. Clarke
4
Children's picture book with many common fantasy characters acting in a play?