A book I read around 1995 or 1996. I don't remember much more than enjoying it and that the protagonist was discovering he had telekinetic abilities, and stabilized a sailship through a storm using telekinesis.

Wild Seed (1980), a novel by Octavia E. Butler, is part of the Patternist series. The fourth book by publication date, it is set the earliest in the series' internal timeline.

Doro, the primary antagonist of the novel, has spent centuries refining human bloodlines for advanced abilities. One such product of this breeding program is Doro's son Isaac, a strongly telekinetic supporting character who is a friend of the protagonist Anyanwu.

On a sea journey aboard a sailing ship, Isaac uses his talent to prevent the vessel from sinking during a hurricane. The text describes how Isaac stands uncannily steady on the pitching deck in the blowing wind while he concentrates on telekinetically pushing the ship to safety:

[Anyanwu] could distinguish Isaac easily from the others. He stood apart, his arms raised, his face turned down and to one side to escape some of the wind and rain, his clothing and yellow hair whipping about. For an instant, she thought he looked at her—or in her direction—but he could not have seen her through the darkness and rain. She watched him, fascinated. He had not tied himself to anything as the others had, yet he stood holding his strange pose while the ship rolled beneath him.

The wind blew harder. Waves swept high over the deck and there were moments when Anyanwu found even her great strength strained ... She could see that other crewmen were holding on with fingers and line. She saw no one washed overboard. But still, Isaac stood alone, not even holding on with his hands, and utterly indifferent to wind and waves.

The ship seemed to be moving faster ... It seemed that the ship was sailing against the wind, moving like a spirit-thing, raising waves of its own.

Goodreads.com shows examples of cover art for Wild Seed, such as this image of the July 1st, 1980 edition from Doubleday Books: 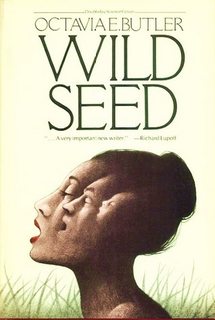 You can borrow Wild Seed as an e-book from the Open Library.

This is a very long shot, but in the absence of any other answers I'll give it a try.

In either The Many Colored Land (1981) or The Golden Torc (1982) by Julian May, there's a scene where a group of humans, rebelling against the 'elf-like' psychic overlords called the Tanu, travel down a river in ancient Europe.

The human captain of the boat is unwilling, so one of the characters, named Felice Landry (you say 'he' in your question, but she's a young woman), uses her new and imperfectly-controlled power of 'coercion' to force the captain to sail them down it. He mentally struggles against the control, and dies just as the boat is traveling through some very dangerous rapids. Felice is forced to save the boat by using her more powerful but still not fully developed or controlled power of 'psychokinesis' to lift and stabilize the boat to get them to safety.

Not the answer you're looking for? Browse other questions tagged story-identification books telekinesis or ask your own question.

11
Identify an SF novel with references to trillium, telekinesis
11
Boy with horse companion and tele/pyrokinesis; unknown author and date
8
Young adult science fiction book: everyone had telepathy, time travel through rift
16
fantasy book/trilogy where magic-using character has swarm of bees as a familiar
13
Book where shuffling through a Möbius strip enables travel to an alternate fantasy dimension
8
Old science fiction book about telepathy, telekinesis, pyrokinesis and mental control of insects
9
Book about a brother and sister that shared a telekinesis connection
3
Help in identifying a book series where two boys and a girl journey through different worlds