This was a weekly two pages in a UK comic in the late 1960's/early 1970's, I can't recall the comic....Victor Hotspur Rover Topper Beezer etc, I read them all.

This schoolboy either invented or inherited from a scientist relation a time machine, every few weeks there was a new story arc so he'd be with Egyptians building pyramids or Ancient Greeks attacking Troy yada yada. (I can't remember how he got the languages but it works for Dr Who)

They were due a Master visit so he hides to observe, then a flying saucer lands and they emerge, they are aliens that look exactly like the statues!

I can't remember the reason they wanted these statues made, I recall the schoolboy organised a slave rebellion, little skirmishes and sabotage and eventually the odd looking aliens left our planet...then the next story arc began

Danny Jones has a magic clock that he can set to a time in order to go there. According to a page I found, he found the clock in a lake, but that was not in the first few issues where he appeared.

Here is the story where he visits Easter Island: 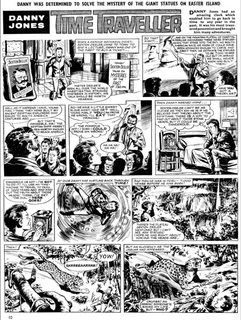 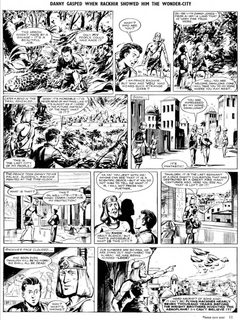 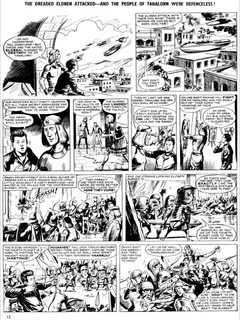 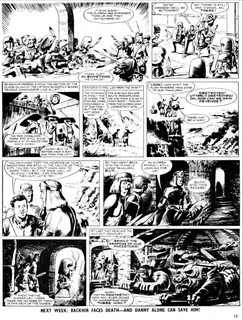 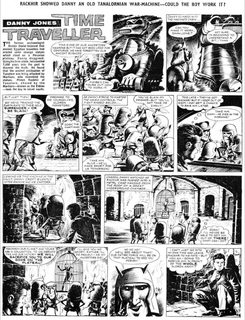 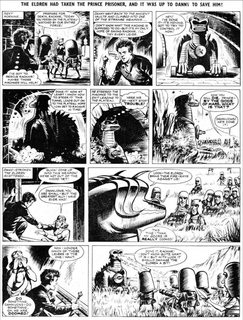 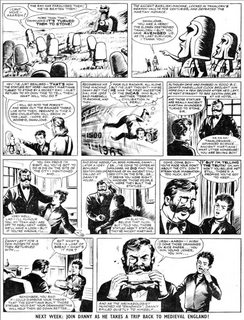 This is tricky, because unlike US comics there doesn't seem to be as much obsessive documentation of British comics...

I'm going to suggest that the most likely candidate is "Kelly's Eye" which ran in Valiant from 1963 to 1971. Unlike the other candidates for time travel stories in that era (I also considered "Adam Eterno," "Legend Testers" and "Jimmy and His Match Patch") it has an actual apparatus used to travel through time (the Time Clock) and an older sidekick (Dr. Diamond) who built it.

"Kelly's Eye" first appeared in Fleetway's Knockabout before moving to Valiant when the two merged. The protagonist, Tim Kelly, was given a magical jewel called the Eye of Zoltec taken from a Mayan idol. Wearing the jewel around his neck, he is invulnerable to all harm. In later stories, the influence of Doctor Who is perceptible, with the story turning into a time travel adventure as Kelly teams up with Doctor Diamond. 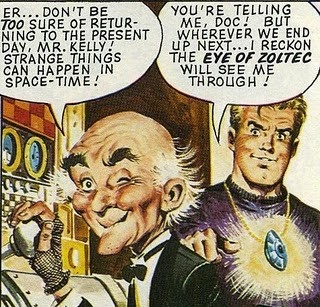 It appears to have been a 2-page per issue comic, based on a couple of samples I've been able to find: 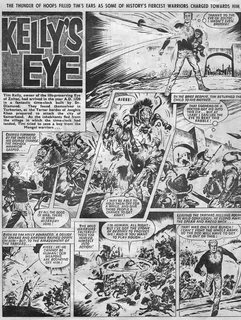 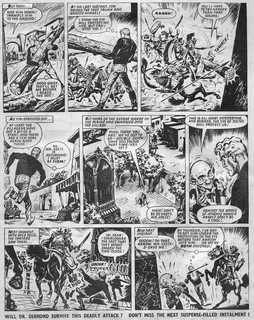 It also fits the idea that the hero is going back and changing things, not just observing what's going on. Some more images and a complete story arc (4 issues/8 pages) can be found here.

The one thing I can't find is an Easter Island story arc for any of the comics I've looked at. The closest I've found is some art for a 6-page sequence from a 1977 Sparky called "The Stone Men" and otherwise it doesn't fit (no time travelers or aliens).

Okay, if it was definitely in Hurricane, then it's almost certainly "Danny Jones - Time Traveller" which only ever appeared in Hurricane and Tiger.

Danny is a schoolboy who discovers a buried 17th century clock (made by a wizard / alchemist, I think) that allows him to travel in time.

Although I don't remember "the Masters" or the Easter Island statues, there was definitely an issue where he went to Atlantis, so we know his adventures weren't always historically accurate.

There's a blog about classic British comics you might enjoy; http://lewstringer.blogspot.com/

6
Looking for the name of a scifi comic strip from a book-for-boys book
5
Recent comic strip - A female PhD, her robot and a spaceship
5
Comic strip about three-legged aliens that invade and trap people in bubbles
5
Book identification sought - children's comic strip and text story book horror
6
Saturday Morning Breakfast Cereal comic strip about aliens
24
Short comic about alien explorers visiting an abandoned world with giant statues that turn out to be alive but move very slowly
8
Old British comic story about a mountain that's really a giant slow creature