How did Thanos destroy the Infinity Stones?

In Avengers: Endgame, we can see Thanos claiming to have destroyed the Stones:

NATASHA ROMANONFF: Where are the Stones?

BRUCE BANNER: You used them two days ago!

THANOS: I used the stones to destroy the stones. It nearly killed me. But the work is done. It always will be. I am... inevitable.

He had reduced them to atoms but, is there any canon information about how he actually did it?

He used the Stones against themselves but, did he use some special mechanism?

He used the Infinity Gauntlet with the Infinity Stones in it to destroy the Stones. Not only is this the way he uses to use all the Stones at once but we have physical evidence that this was the case. When the Avengers go to Titan II in hunt for Thanos after they detect the Stones are used again we see the toll it has taken on Thanos. We see now, his left arm has been amputated or destroyed, probably when the Gauntlet was destroyed, destroying the Stones. And we also see he has burn marks all the way up the side of his body to his head. This is evidence that he destroyed the Stones/Gauntlet whilst wearing them because he had a left handed Infinity Gauntlet. 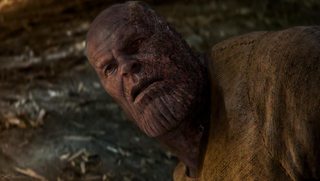 As for how he activated it, well, there is one rule in universe and that is he has to make a fist to do so.

“As you can imagine, when you have a gauntlet that has nearly unlimited power, and every time you use it you can do what you want ... we wanted to create small physical rules that would allow people to hang in a fight with him, so the idea that he had to, you know, close his fist to use a stone was the bare minimum that allowed us to have a fight,” McFeely said.

“So that every choice they're making, you'll notice in that last minute of fighting, is to keep him from closing his fist. From Peter webbing it to the cape wrapping around it,” added director Joe Russo.

And of course we also know to perform a major action with the Gauntlet one would appear to have to snap their fingers, or at least all the known cases we have of it, people have snapped.

Gamora: If he gets all six Infinity Stones, he can do it with the snap of his fingers, like this.

Considering the scale of the action he probably snapped but we don't know exactly if he did, or if making a fist in this case was enough.

The clue lies in the way how the Avengers found out where Thanos was in Avenger: Endgame.

Thanos used all the six stones twice in Avengers: Infinity War, second time during the snap, and the first time minutes before the snap while he was trying to block Stormbreaker.

STEVE: So where is he?

ROCKET: When Thanos snapped his fingers, Earth became ground zero for a power surge of ridiculously cosmic proportions. No one's ever seen anything like it... Until two days ago. [A hologram of a planet pops up, with a shockwave visibly traversing the surface] On this planet.

NEBULA: Thanos is there.

So, we can eliminate the fact that he used all the stones but didn't snap. It is therefore highly likely that he performed the snap again to destroy the stones.

Not the answer you're looking for? Browse other questions tagged marvel marvel-cinematic-universe avengers-endgame infinity-stones or ask your own question.