When I was younger I read three books that were bound into one book, all by the same author I believe. The first two books were in the same universe and the third one was not.

The first book was about a man who enlists in some kind of big intergalactic(?) space war. The technology in the universe meant that travelling the large interstellar distances took a long time (hundreds, possibly thousands, of years) and passengers were put in stasis. Often a ship full of soldiers sent off on a mission would find that the mission has already been completed by soldiers sent on a faster ship at a later date, or would arrive and be immediately destroyed by resistance that is far more advanced than they are, due to the advances made while they were asleep.

A part of the story I remember is that every time the main character comes back to Earth, it has gone through big changes, most notably the sexuality of the population. When he leaves the population of Earth is generally heterosexual, when he returns most of the population is homosexual, and sex changes are offered to everybody for free.

The second book is in the same universe as this. I only remember a small amount of this plot but a major part of it was the decision of a large part of this society to go on a long round trip, essentially time travelling into the future of their planet.

The third book was in a different universe. One where 'jacking', very much like the matrix, is commonplace. Soldiers use this technology to jack in to mech suits and kill ridiculous amounts of some enemy, and also civilians. The recordings of these experiences are sold on the black market for people to relive by 'jacking in' to the memories themselves. Another large part of this plot is a machine that can turn any element into any other, e.g. fusing a large quantity of sand into diamonds, or any other element.

I've tried to be as specific as I can, but unfortunately I don't remember much else about the books. I believe I read these in or before 2012, although they were not new books when I read them.

You most likely read the omnibus Peace and War, which collects Joe Haldeman's three "Forever" novels, Forever War, Forever Free, and Forever Peace. The latter is only thematically linked to the two first.

The summary from Goodreads of the three novels is:

WAR: William Mandella is a reluctant hero, drafted to fight in a distant interstellar war against unknowable and unconquerable aliens. But his greatest test will come when he returns to Earth. Relativity means that everey time he returns home after a few months' tour of duty, centuries have passed on Earth, making him and his fellows ever more isolated from the world for whose future they are fighting.

FREE: When Mandella returns for the last time he finds humanity has evolved into a group mind called Man. Living a dull life in an autocratic and intrusive society, missing the certainties of combat and feeling increasingly alienated, the veterans plan an escape. But when their ship starts to fail, their journey becomes a search for the unknown.

PEACE: 2043. The Ngumi War rages, fought by 'soldierboys', indestructible machines operated remotely by soldiers hundreds of miles away. Julian Class is one of those soldiers, and for him war is truly hell. But he and his companion, Dr Amelia Harding, have discovered something that could literally take the universe back to square one. For Julian, the discovery isn't so much terrifying as tempting... 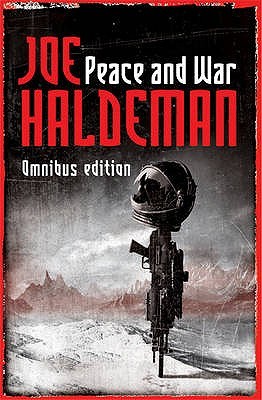 The first segment sounds very much like the Forever War, by Joe Haldeman. It is the first book in a series, thought the two follow ups were published decades late. The Forever war is from 1974, the follow ups, the late 90s.

The Earth's leaders have drawn a line in the interstellar sand—despite the fact that the fierce alien enemy that they would oppose is inscrutable, unconquerable, and very far away. A reluctant conscript drafted into an elite Military unit, Private William Mandella has been propelled through space and time to fight in the distant thousand-year conflict; to perform his duties without rancor and even rise up through military ranks. Pvt. Mandella is willing to do whatever it takes to survive the ordeal and return home. But "home" may be even more terrifying than battle, because, thanks to the time dilation caused by space travel, Mandella is aging months while the Earth he left behind is aging centuries.

William is conscripted rather than enlisted. They're fighting a war that takes place on other planets that they travel to via near-light speed craft. Causing time dilation so they don't age and travel "forward" in time in big jumps as the book continues. This leads to a mixture of crub-stomp victories and defeats depending on who's technology is out of date.

In William's first return to Earth, major social changes have caused the government to encourage homosexuality as a means of limiting population growth. The further "forward" in time William travels, the more pronounced this change is.

I lose track of where the books finish and start, but at the end of the War a number of veterans from the early stages take a near-light speed ship on a trip to nowhere to "wait" for the rest of the soliders to return. When everyone is back, the go off and set up home on a remote planet away from what humanity has become.

Which by this point is a single individual cloned millions of times, known as Man which has made peace with the enemy who have completed an identical process.

The early sections of the first book cover training and use of the mech-suits. Of the Waldo type variety. Basically humanoid suits that magnify the user's muscle capability and are loaded with weapons. These play a prominent role in the third book as well, there stealing one out of a museum gets the main plot rolling.

This sounds a lot like the Forever War by Joe Haldeman and the sequels Forever Peace and Forever Free.

The main protagonist is in the military fighting a war across distances in space that make relativistic time dilation effects significant and so long periods of real time are experienced as short missions by the fighters.

At the end of the first book the protagonist returns to Earth to find that most of the population are now clones. This also allowed the human race to finally communicate with their enemy who were also clones, this bringing the conflict to an end.

22
Sci-Fi book with 4 prison planets
5
Help me identify this book that uses cloning for space travel
8
Sci fi book about knights with swords and armor and "arc" weapons
9
Old book with Sci-Fi/Fantasy mix with four Irish relics (stone, cauldron, spear and sword)
5
Book about two kids who travel through history and seeing, among other things, the death of Archimedes