Source of a Quote by Alpha Trion

By the third day, larger creatures began to appear, and then Prima called me over to witness thing he was eager to point to me...at the head of them, slowly pacing forward with an expression of surprise and wonder, came the figure we thought we would never see and wondered if we would ever recognize. I recognize him immediately, although he looked nothing like Thirteen- he was far smaller and simpler, an altogether unimposing bot of no particular outstanding feature other than the unique signature of his spark.

Does anyone know where this quote was taken from?

I first saw it referenced here: Is Optimus Prime as we know him one of the Thirteen Original Primes?

TransKas is responding to an inquiry about the Aligned continuity and whether or not Optimus remembers his original life.

It appears to be a quote from the prose novel Transformers: The Covenant of Primus. 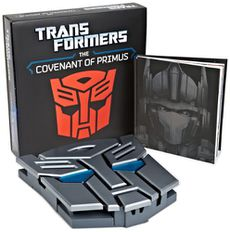 I've not got a copy, but it's mentioned (and quoted) here. Warning, NSFW (naughty words).

Not the answer you're looking for? Browse other questions tagged transformers optimus-prime or ask your own question.

13
Is Optimus Prime as we know him one of the Thirteen Original Primes?

13
Is Optimus Prime as we know him one of the Thirteen Original Primes?