In MoonWalker, the film, what exactly was Michael implied to be?

At the end of the film MoonWalker Michael Jackson's fictional version is implied to be something more than human. He has a connection to falling stars which give him various transformative powers, including...

It's never clearly stated however if he was an alien, a cyborg of some kind, or a human given morphing powers ala the Power Rangers or Ultra Man.

Are there any sources that speak to what he was?

There is no other implication than he is a human.

At the end of the Moonwalker Movie cast is listed as1:

On the Arcade game backstory is3:

Michael Jackson's Moonwalker is based on the Michael Jackson movie. Mr. Big has kidnapped children and has nasty things in store for them, like drugging them and making them slaves. So it's up to Michael to use his magical powers and dancing talent to try to catch Mr. Big and rescue his little friends. 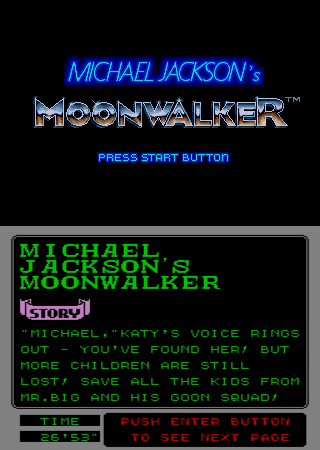 Not the answer you're looking for? Browse other questions tagged moonwalker or ask your own question.