Where is the deflector array on the Phoenix?

When the ship is seen from the Enterprise, we see no deflector array. In fact, shields are never even mentioned at any time in the movie.

Eventually, the Phoenix does go to warp, however we don't see the front of the ship. But titanium is not going to help you if you hit a piece of dust at 47,000,000 mph. How are the shields on the Phoenix generated? 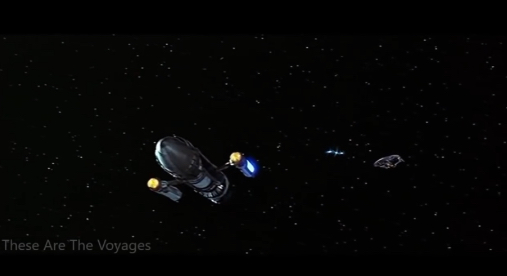 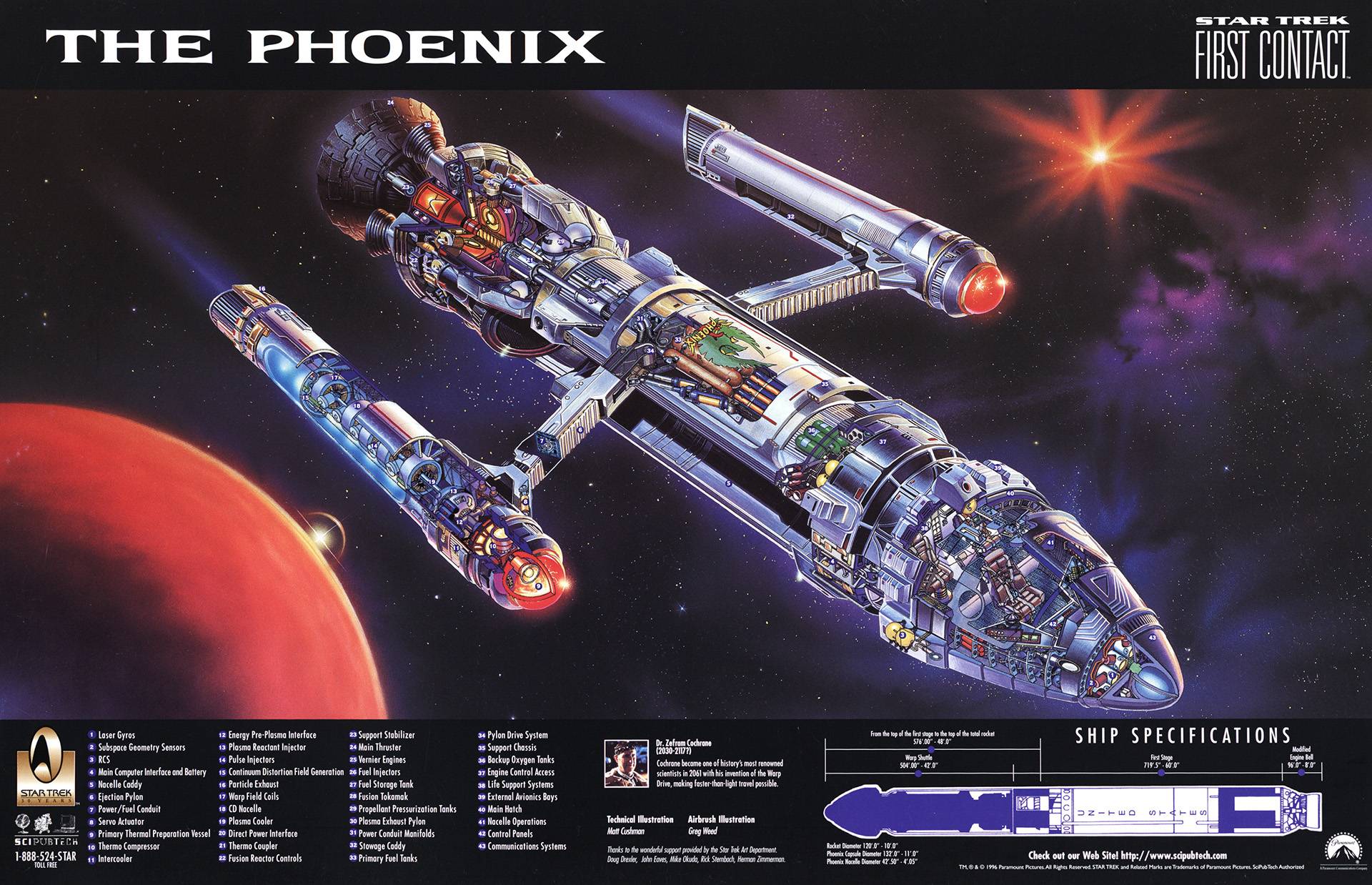 For the record, Tom Paris seems pretty confident that Voyager (in VOY: Tattoo) could make a low warp "jump" inside a planetary atmosphere. It would appear that for very short periods, normal metal plating or basic magnetic shielding is sufficient to deal with normal in-system dust or even thin atmospheric conditions as long as you don't mind risking hitting something bigger and dying horribly (see: Why did the Enterprise drop out of warp before reaching Bersallis III?)

KIM: Could we go to low warp under these conditions?

PARIS: The ship might make it without inertial dampers, but we'd all just be stains on the back wall.

Similarly, the Bajoran light-ships that Sisko recreated in DS9: Explorers happily goes to a low warp factor without anything that looks like shielding or a deflector.

Apparently, the Phoenix doesn't have a navigational deflector at all.

The navigational deflector is a very important part of a starship in Star Trek, its purpose is to generate a kind of force field to, well, deflect dust, small rocks and other minor debris, in order to prevent collisions with the ship, mainly when travelling at warp speed. This system is related but not the same thing as the Deflector Shields, which have a more distinct tactical purpose.

Given its function, it is located in the from part of starships, and it is usually a big and recognizable part of the hull: I think that it is safe to say that, if this device is present, it should be well visible and identifiable.

Anyway, if we look at the Phoenix, no such device is clearly visible. I think that there are two important factors that we must consider here:

When you are pioneering a new technology, it is rather difficult to think ahead every detail and every possible implication about its practical usage; the absence of a navigational deflector could simply mean that, at the time, being this a brand new technology, could mean that nobody thought about the risk of a possible collision and how to prevent them, or that they had not the technology or the resources to design a create this device (a warp engine and a deflector are not the same thing and are not based on the same technology, it is perfectly plausible to have one without having the other). 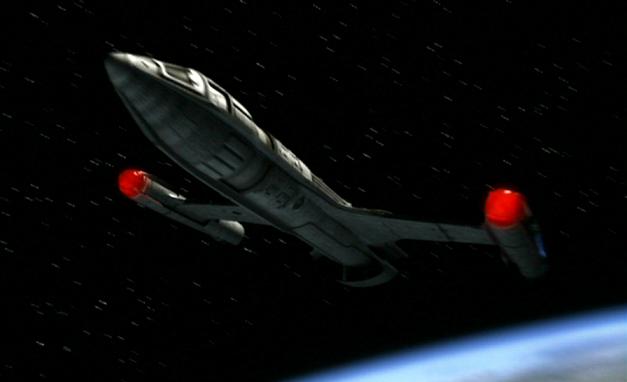 If we have a look at the NX Class, we can see that at this point in history, this kind of device was finally implemented as a standard equipment of the ships: 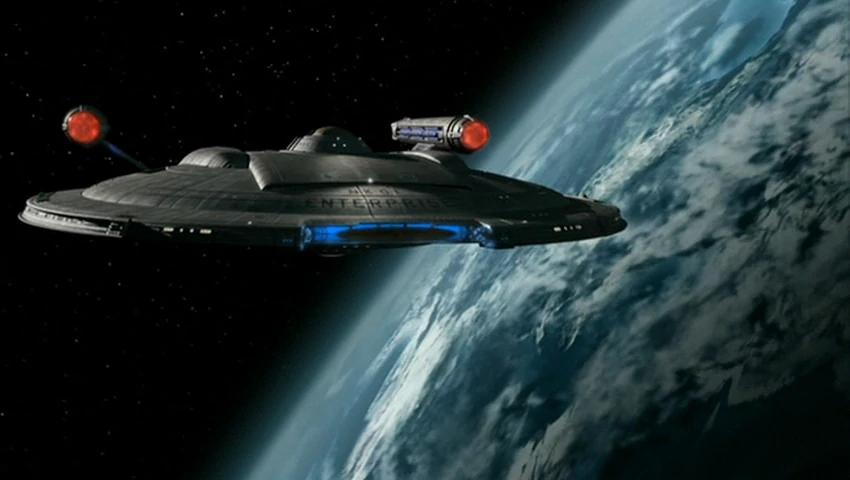 It must be noted that prior to the NX Program, Earth starships were capable to travel at maximum at Warp 2, only the culmination of the project with the NX-Class made them capable to reach Warp 5.

It is possible that with the relatively slower speeds prior to the NX Program, minor debris were not considered to be a problem (there were relatively few ships flying around at that time, we are still talking about a pioneer era), and that only with Warp 5 a new deflector system used to protect the ship from this kind of hazard was developed.

As an example from real world, have a look at some of the first automobiles, like Benz Patent-Motorwagen or Ford Model T: they are not equipped with all the devices and sub-systems of a modern car, they don't even have the looks of modern cars; most of the technology that improved them form those early days to our time, was developed and introduced gradually. By analogy, even systems on Star Trek ships can be considered as product of a, ongoing development and refinement of technologies.

47,000,000 mph is far less than the speed of light (about 7%). Nevertheless, even tiny particles of dust impacting at that speed could do a lot of damage. In-universe, it was an adequate test of the necessary technology to achieve interstellar travel, and sufficient to get the attention of the Vulcans. As to the core of the question, we could look to real-world research into the Alcubierre drive. Speculation is that as matter passes through the warp field from outside and enters the space contained within the field, its velocity changes so that it won't actually have a very high relative velocity anyway; it would depend on the particle's original velocity in normal space and the spacecraft's motion within the space contained inside the warp field. The need for a deflector may come from a faster ship actually attaining higher real velocities within its warp bubble and therefore having to deal with matter arriving at higher relative velocities. That would also address the matter of inertial dampers; if the spacecraft isn't accelerating much withing its warp bubble, there isn't much need of such a measure.

As far as I'm aware, the Phoenix doesn't have one.

And none is actually necessary unless you intend to travel at speeds approaching (full) Impulse. Remember that, according to the physics within Star Trek, a ship at warp is stationary in a small pocket of space within the warp bubble. Space-time in front of the bubble is compressed, while space-time behind the bubble is expanded, and this is what allows for faster-than-light propulsion without violating the laws of physics. Now obviously, compressed or not, this space-time has to go somewhere, and I believe that this compressed space-time is diverted around the edges of the bubble, to be expanded back into normal space-time near the tail end of the bubble. As the ship itself doesn't move at warp, there are no high-speed collisions to deal with, leaving the shell of the missile to contend with relative speeds that are well within its original design parameters.

Not the answer you're looking for? Browse other questions tagged star-trek star-trek-first-contact or ask your own question.

31
Why are Starfleet vessels designed with nacelles so far away from the hull?
12
Has there ever been a warp / non-warp collision?
13
Why did the Enterprise drop out of warp before reaching Bersallis III?
6
Have aliens contributed any technology to humanity?
4
Can the warp drive be run in reverse?

25
What would be the effects of warp collisions?
14
Why doesn't the Enterprise ever hit an asteroid?
3
How was it so easy for the Borg to transport aboard the Enterprise in First Contact?
3
Why is the deflector disc for most starships below and behind the front of the ship?
8
In Star Trek, is there an upper size/mass limit to what the Main Deflector can deflect?
12
Has there ever been a warp / non-warp collision?