Has any version of Marvel's Black Panther ever been able to actually turn into a Were-Panther form?

I know I saw this somewhere, possibly in another reality outside of 616.

In that version, T'Challa (the Black Panther) seemed to "shift" into a humanoid panther form, very similar to Wolfbane's "mid way" form.

Can someone please point out what version, comic, film or alternate show where this takes place, and explain how it happens?

By that, I mean was it a side affect of the heart shape herb, was it a mutation of the Wakandan royal family, or was it accomplished via some form of device?

In Marvel's Mangaverse designated as Earth-2301, T'Challa is able to transform into a Were-panther. In Marvel Mangaverse Issue #4, when Doctor Doom attacks the UN summit, T'Challa is shown to transform into a were-panther (image below). However, this is supposed to be his normal ability (as opposed to the other Marvel universes where he wears a suit). 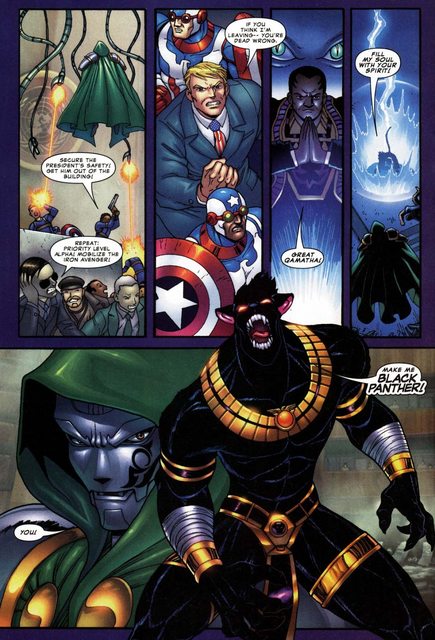 Addressing the second part of your question, this transformation is neither related to the heart-shaped herb nor is it any hereditary trait. On the contrary, the power of the Black Panther is granted by a spirit (or some deity probably) called Qamatha.

Considering you'd also like some other instances, King T'Chaka was also able to transform into a Were-Panther. In the animated movie Ultimate Avengers, when Herr Kleiser attacked Wakanda with his Chitauri army, the Black Panther's mantle was still with T'Chaka. He tried to defend his kingdom but was ultimately killed in the process. However, during this time, we do see T'Chaka transform into a were-panther (watch the video below; transformation at the 3:00 mark)

Not the answer you're looking for? Browse other questions tagged marvel alternate-history black-panther or ask your own question.

7
Has the problem of the Legacy of the Black Panther ever been solved in the comics?
22
Has Black Widow ever been imbued with Spider-Powers?
4
Has any version of the Hulk ever had a definitive fight with Gladiator?
4
Does Storm have any family, i.e. are Spyke and Mij'nari canon in the main Marvel universe?