The point is, I think there is a guy with blond hair and his spaceship crashing onto a waterplanet to the bottom of the sea. There are fish people and all sorts of water creatures, I think also normal humans who live in their underwater domes.

The guy's spaceship has a big crystal that has the specialty of giving life to a planet or whatever. He takes it directly to or from his dead planet.

That's what the ominous dark lord wants to take himself by manipulating everyone in the background for some reason. He can see everything, he knows everything, but he was that type of villain who need helpers. I don't remember what it looked like because it either didn't have a body or just didn't show up.

If I remember correctly, the guy lost his consciousness in the fall. They take him to the human palace and he goes on an adventure with a blonde princess.

Then the dark lord casts a shadow over their castle and convinces the princess's father, the human king, that the stranger is dangerous. He sends his fish-people general, who, with his army of aquatic creatures, explores the seabed.

The villain then invades the fish general's mind and leads him to the crashed spaceship.

Someone found it for me. The New Adventures of Ocean Girl was a 2000 cartoon reboot to the 1990s series Ocean Girl.

Galiel is weakened as the power of his crystal wanes. He's attached to a life-support system, and until late in the series, can only project himself as a shadow from the Containment Chamber. 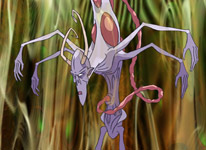 Not the answer you're looking for? Browse other questions tagged story-identification spaceship cartoon or ask your own question.

12
80s horror book with a man crouched and eating a leg on the cover?
4
Old anime/cartoon where a spaceship turns humans evil
6
Cartoon: 4 kids transform into video game characters to save the world from a hacker and an evil program