In "Star Wars Episode IV: A New Hope", when R2-D2 plays the holographic recording of Princess Leia at Ben Kenobi's house, Leia's image is projected on a round stone table where two silvery objects, that look like small oil lit lamps, rest.

There is a third object, a dark clay vase or amphora, that appears and disappears between shots (probable goof) but I am not sure about the two silvery ones. What are they?

After an extensive search, the only reference to these that I managed to find were, as you mentioned, listed as a goof, that simply states

Items on Ben's table as he watches the hologram.

There is no direct reference to these items anywhere else I can find, and even this description is vague, possibly referring to there being 3 items in one shot, then only 2 in another.

Outside of this, any other description could only be speculative; as rs.29 mentioned in their comment:

Considering that Episode IV was filmed in Tunisia, and whole first part of the movie has this distinct desert aesthetics, I don't think there is much more significance then usual Arabic tea utensils. They simply match the atmosphere and tone of the movie, and serve no special purpose in SW universe.

This is common in scifi and fantasy movies, to make the atmosphere more "real", by simply filling it with items that fit the atmosphere, and serve little to no other purpose.

Anthony Daniels (the actor who plays C-3PO) describes the filming of this scene in his 2019 autobiography. He identifies these objects as ear trumpets:

"Sir, if you'll not be needing me, I'll close down for a while."

Maxi flicked an external switch he'd rigged earlier. Threepio's eyes went dark. It sounded as though I would have the morning off.

They were looking into space. Moments before, Props had put a small oil can on the table. Sir Alec and Mark stared at it before it was whisked away. The actors kept gazing at the empty space as they said their lines. Eventually, George would superimpose the classic shot of Carrie's hologram, and Obi-Wan and Luke would be looking right at it. But at the time, there wasn’t much to admire, except the strange objects on Obi-Wan's coffee table – weird, trunked, upside-down cups. I asked. Of course – antique silver ear trumpets. Props are ever so inventive.

An ear trumpet is a non-electronic hearing aid that concentrates sound for a person holding the narrow end to his or her ear. These devices have a variety of shapes, including a form that matches what we see in Star Wars: 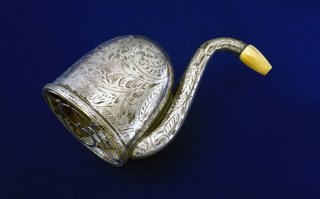 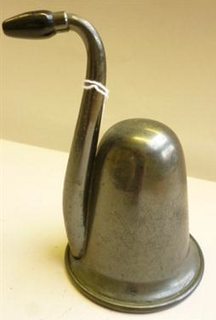 — Source: Swords to Ploughshares, and Aircraft Carriers to Ear Trumpets

You mentioned a continuity glitch:

There is a third object, a dark clay vase or amphora, that appears and disappears between shots (probable goof)

This may be the oil can that Anthony Daniels describes the film crew using for setting the actors' eyelines.

Instead, he leaned back against the rock wall and tugged thoughtfully at his beard, puffing slowly on a water pipe of free-form tarnished chrome.

The pair of objects on the table appear to be stylized figures of swans. They are the right size to be salt and pepper shakers, perhaps chosen in this context for swans' resemblance to the long-necked starbird of the Rebel Alliance emblem: 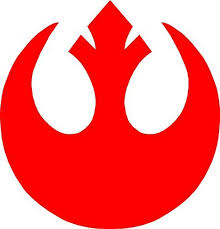 Star Wars Rebels, which was produced later than Episode 4 but set earlier, seems to establish a design relationship between the Rebel Alliance emblem and the long-necked starbird that exists within the mythology of the Star Wars universe.

Another possible reason for the set decorators' choice of these props is that the conversation in Kenobi's home, where Luke learns about his heritage as a Jedi, sets Luke on a path of maturation similar to the story of The Ugly Duckling, wherein a juvenile swan raised by ducks grows into a grander and more satisfying destiny than it had envisioned for itself.

Swan figures are frequently available in sets of two, with one swan's head raised higher than the other's as the screenshot from Star Wars Episode 4 shows, such as these statuettes and salt and pepper shakers: 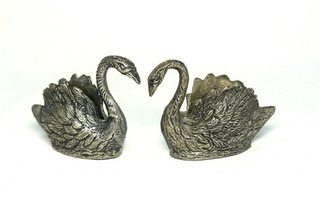 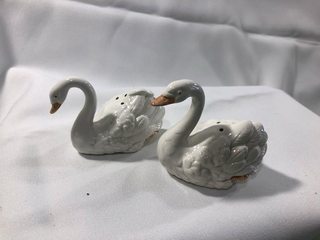 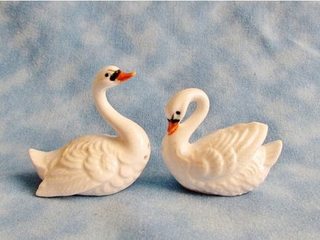 46
What does the Rebel Alliance logo represent?

21
Did Luke really "stumble across" the recording?