How is Data powered?

What powers Data from Star Trek The Next Generation? Did he generate his own internal power or did he have to plug into the Enterprise periodically to recharge? Or perhaps a combination of the two?

From the transcript of Insurrection:

ARTIM: Don't you ever get tired?

So he is powered by "power cells" that continually recharge themselves, therefore apparently he does not have to plug into the Enterprise to recharge.

Indeed there is also the episode where his head is stuck in the cave (Time's Arrow) for over 500 years, and it still works fine afterword.

According to producer Mark Nguyen:

Early concept art from Rick Sternbach showed a bed for Data which recharged him sorta like a huge D-cell battery charger, with teminals for his head and feet. No physical connections - he'd just lie in the bed and it'd light up. This was obviously not used as a concept, since we later see him sleeping ins a regular bed.

While TNG's heydey was really before the real-life wireless revolution, I see no reason he couldn't recharge without having to plug himself to something. He's always sitting at that workstaion of his, which is unique among props - perhaps that had a recharging function.

There's no real way to recharge by walking around, since he has to expend energy to walk (shaking a wristwatch to charge it is really just transferring energy from your body too). You could theorhetically absorb potential energy from gravity by walking down stairs, but how often does THAT happen in Trek?

To which Rick Sternbach replies:

'Tweren't mine. That was a drawing by Andy Probert. If you really want to know what Data runs on, it's lots and lots of old lithium cell phone batter-- well, batteries of a sort. Sarium krellide power cells have been around for about 150 years, and Data's SK cell packs have been augmented by biochemical and electroplasma micro-reactors. Boy, that Dr. Soong was nothing if not thorough. :)

I know this is an older post, but I remembered it when I saw the attached screenshot on Memory Alpha. Apparently Data has a type of chemical fuel reaction unit. This is very likely the mechanism that keeps his power cells continually charged. 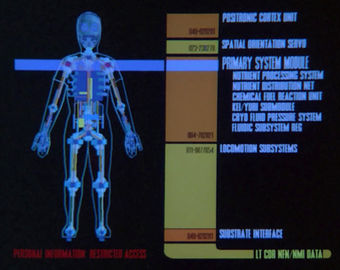 Data had mentioned his power source will last ?? years. Then he said that his legs' length will be same as when fresh-constructed and also same as when in the end of the battery life. This shows he didn't need plug into the Enterprise.

"Don't you ever get tired?", Data says "My power cells continually re-charge themselves."

I haven't really seen an answer yet so I'll take a crack at it. There is no answer directly in any episode or movie. Several people have mentioned the following quote from the movie Insurrection

<ARTIM> Don't you ever get tired?
<DATA> My power cells continually re-charge themselves.

The original question was, "How is data powered?" then a further explanation of the question, "What powers Data from Star Trek The Next Generation? Did he generate his own internal power or did he have to plug into the Enterprise periodically to recharge? Or perhaps a combination of the two?"

The second part or explanation is sort of answered above and in some other answers. What powers him are power cells. Based on the quote from the movie they recharge themselves.

However nobody fully answered the broad and more interesting question of how data is powered. I wanted to ask this question myself, but it would have been deemed a duplicate question by the overseers of the site.

I would like to posit, that when we view sci fi or Star Trek we accept that whatever is true in our universe is true in the Star Trek Universe as well unless there is a conflict. So what we call a chair, in the STU is also a chair. If we use a term scientific or otherwise it holds true that it has the same meaning in the STU. There are some conflicts since the STU is more technologically and scientifically advanced than us so of course there would be new discoveries that might conflict with our own understanding of physics, chemistry, etc.

In this case there is no STU explanation for what is powering data. What is a power cell? How does it work? How does it recharge itself? Some others above gave answers that tried to deal with some of these issues.

Since there's no conflicting science and no direct answer ever given, my answer is that it's either fission or fusion. I would doubt that it's fission since the amount of nuclear waste that's created would have to be dealt with and one would think that it would have surfaced in an episode somewhere. So based on current physics, and that the STU gives no answer or any conflicting theory, that it's fusion. This would give data an almost unlimited power supply in a small area with relatively little nuclear waste material to deal with.

Data does mention in Deja Q that he drinks an organic compound that is "good for me." He further explains that it does lubricate his systems. So data does need or can benefit at least from some forms of maintenance. Something like minor waste disposal, for lack of a better term "android excrement" would be something I would not expect to necessarily be dealt with in an episode.

The only other possible source in Universe that I can think of would be some sort of anti-matter generator, antimatter fuel cell, or whatever you want to call it. Again, I'm not sure how that would work since we don't have technology like that. But we do know in universe that at least the federation does need dilithium or other crystals and that they have to be maintained in some way or replaced from time to time. If it's something that simply keeps going on in perpetuity or at least for a really long time without complication, it has to be fusion.

32
How can Star Trek: Countdown ever be considered canon?
3
Who is Data's creator?
10
How does a Romulan quantum singularity work?
11
How did Picard send a binary message to Data in the future?
0
How does Data know what Bingo is but not what perfume is?
9
How is this ageless Data realized?
31
How does Data know about his off switch?
1
What bodily function would be an appropriate analogy to the “Manheim Effect” according to Data?