Why wasn't Captain America eating in the end of The Avengers?

In the Shawarma scene, everyone is seen eating except Captain America. Why isn't he eating? 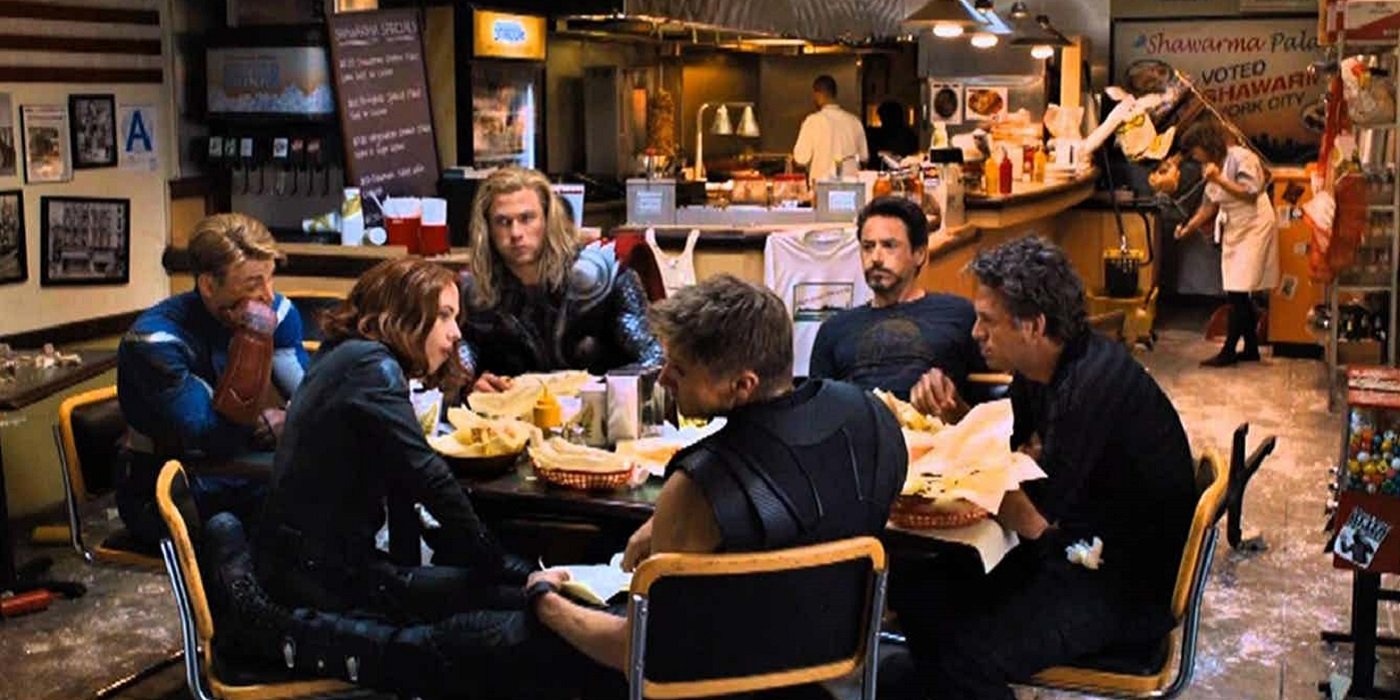 The post-credits scene wasn't filmed until production had already completed and so the various actors had already moved onto new roles. Chris Evans had a role in Snowpiercer in which he needed a beard. As this was a quick scene and he was currently filming for Snowpiercer a prosthetic was fitted for Chris. This meant he couldn't really eat and is also why he has his hand covering his face for the whole scene.

Robert Downey Jr. has just entered the room, and immediately begins mocking the prosthetic that Evans needed to hide his beard for the scene. (Evans also, you’ll notice, covers his face throughout that footage by resting his cheek against his hand.)

“Where is Chris Evans? Getting his face replaced?” Downey asks.

Evans hasn’t arrived yet, but that doesn’t hold back Downey. “Chris, why the long face? Chris, why the WRONG face?”, Downey says as the other guys laugh.

Ruffalo shakes his head, his lips pursed. “Oh no …”

“I felt so bad for him!” Hemsworth says, wincing. He makes a swallowed sound, like someone trying to speak through glued-shut lips.

Downey twists his face into an Elephant Man snarl. “Hey guys, I am not an animal,” he mutters.

Entertainment Weekly, 'The Avengers': The story of the after-credits shawarma scene

The problem, of course, was that they had all since gone off to do other things, with Chris Evans specifically filming a movie called "Snowpiercer" where he grew a beard for the role...

Therefore, the solution was that they would build a special prosthetic jaw that Evans would wear that would cover his beard and make it look like he was just the same ol' Captain America from earlier in the movie. Naturally, though, while an excellent prosthetic, it wasn't so good that it wouldn't be sort of visible if he ate with it on, so not only does Cap not eat, but Evans has his jaw in his hands, covering up the prosthetic for the scene.

The Entertainment Weekly article also goes into more detail on why the scene was shot so late. Basically to make the Shawarma joke better, but it's a long quote so have a look at the article if you want some more context. It might also be worth looking at this video about the filming of the scene.

Lastly, an in-universe reason is that he does actually start to eat towards the end of the scene. He takes his left hand from the table and starts picking at his food. Now he's either just picking at his food and so his full or doesn't have an appetite or is just looking for a "good bit" to eat, the scene cuts away too quickly. Look closely at Cap's left arm/hand starting from 24 seconds in the scene especially towards the end you can see his hand over Nat's shoulder picking through the food:

At the end of the scene he's clearly shown reaching into his shawarma basket for a French Freedom Fry or other piece of food.

It looks like he's already finished his meal and is falling asleep at the table.

In character, they just look dead tired to me. They all seem to have a haunted look about them, remembering what they had just went through. They had just fought a grueling day long battle with an alien army trying to invade the earth. They each had taken some heavy hits (especially Cap getting blown out of a 3 story building and taking a Chitari weapons blast to the gut). In that battle they pushed themselves well beyond exhaustion and the adrenalin has dumped by the time they sat down to some schwarma. The only ones who seemed to be getting into the meal is Thor and Hulk... er Banner. The rest look like they just want to get some sleep. I wouldn't be too harsh on Cap for not chowing down like Thor and Banner/Hulk seem to be. Superheroes need rest too.

Not the answer you're looking for? Browse other questions tagged marvel marvel-cinematic-universe captain-america the-avengers-2012 or ask your own question.