Sci Fi story in which main character erased his own memories

So I'm thinking of a trilogy. It starts out with the main character infiltrating an office that stores genetic information. It's a dystopia, with people being chipped for identification. He has an AI inside his head that helps him out. Later, he busts out a top scientist from a government facility. Then he finds out he has a sister, she's on the moon directing something. The scientist helps him incorporate the AI, so now he can take control of construction robots and he uses them as weapons. His opponent also gains that ability, and they have a fight in a habitat.

Edit: So I read this pretty recently, probably within the year. So there are basically two classes of citizens. Some that the government finds useful, which are basically kept in gated communities and the rest, which are, like, dead weight. Everybody is chipped, and it's illegal to remove that chip. A chip can detect if it's been removed from someone's arm, etc. Anyway, he was a scientist and he was close to inventing something that the government wanted. But he didn't want to give it to them. So before the story starts, he was captured/tortured/experimented. Then sent to a disposal facility. He wakes up on the conveyor belt, and the AI with which he communicates helps him escape. He knows some stuff, but is oddly missing other: at first he doesn't know what feet coverings are called (shoes).

There is a group of rebels as well, which he coopts to fulfill his own goals. There is a spaceport, with rockets that lift off, and he gets there in a car, which he abandons moments before it explodes.

The Departure by Neal Asher. It's the first book in The Owner trilogy. 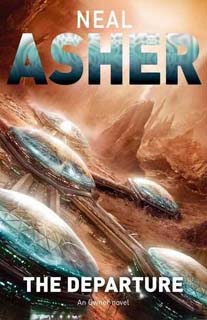 The scientist is Alan Saul and he wakes up in a crate that is being sent for incineration. The AI in his head is called Janus. The useful citizens live in luxury on a space station called Argus, while the rest are forced to live on an Earth that has become a wasteland.

The incident with the shoes comes when Saul has just attacked the driver of the vehicle taking the crate for disposal:

Paul fired and lightnings shorted to the ground all around the driver as he jerked and grunted into unconsciousness. Saul stared for a long moment, considering what he now knew. The Inspectorate had obviously had him in their cells and then sent him off for disposal. He had been a marked man but was now supposedly a dead one. He walked over to the driver and searched him, finding cash money, a palmtop and little else. No papers, but the man wouldn’t need them, since he’d have an ID implant embedded in his arm. Saul then took off the fellow’s foot coverings and held them towards the nearest cam post.

"They are boots," Janus supplied.

"Boots are the rear compartments in ground cars," he argued.

"Nevertheless, what you are holding are also boots – or perhaps shoes."

The words just weren’t there in his head and their absence both frightened him and locked inside him a sudden determination. He pulled on the footwear and stood up, then walked round and climbed into the transvan.

17
Main character can “manipulate” his own time
7
Woman spy breaks into a govt facility. Finds spheres filled with little people fighting
13
1950's SF story: Farm boy discovers door at the end of the world; discovers several other worlds in asteroid
6
Webcomic in which humans have animal powers; main character sets out in the world to find her missing father
6
Novel about kids seeing spirits with a main character who is an orphan
8
Anime about prisoners in a warehouse being attacked by monsters; main character went off on his own and finds a school/hospital he felt he knew
43
Short story about a teenager who has his brain replaced with a microchip (Psychological Horror)
15
'70s era movie about pandemic and extermination system