Not everyone was a citizen though, there was a significant underclass who had no shares.

One character was a celebrity in some sort of combat game who was followed by camera drones & used drugs to suppress puberty so he waa an eternal 'child', I have the impression that medical science allowed virtual immortality short of accidents.

One character (may have been the same one) had had a 'previous life' & had committed personality suicide by some form of mind wipe bequeathing his worldly possessions to the new personality that would eventually develop in his old body.

I think the motive for this 'suicide' was essentially boredom, he'd lived a long time.

The mind wipe in question was pretty extensive & all encompassing, he had to be cared for & educated from scratch as if a newborn baby in an adult body, nappies & all (but I'm pretty sure this was purely backstory in the book I read).

He also had miniature nano organisms (or bots?) like miniature worms or millipedes that complimented his immune system & aided healing, they were self replicating, pretty sure they were some sort of bioengineered organism tailored to his DNA rather than bots but not 100% on that.

One of the characters fell into this but got pulled out before the full effects took hold, as a result he grew leaves from his head & his immune system was then constantly battling with the 'infection'.

When did I read this? probably some time in the 80's in the UK.

When was it written? I haven't a clue, sorry.

It was a paperback, probably something I had out of a library, because I never get rid of anything I've bought myself so I'd still have it & be able to dig it out if it wasn't a library loan.

I have lots of fragments of world background & 'colour' that seem to have stuck in my mind there, but a complete lack of any story arc to go with them.

The Artificial Kid by Bruce Sterling

The Artificial Kid takes place on the planet Reverie, a world of coral continents, levitating islands, and the corrosive, transformative wilderness of "The Mass." Reverie has been transformed into a utopia/dystopia, with a stark class division. Arti, a heavily biologically modified boy from the Decriminalized Zone, becomes a pop star by selling videos of himself engaging in bloody combat with other fighters for the entertainment of the upper classes. When Reverie's founder, Moses Moses emerges from seven centuries of cryosleep, and Arti discovers an unpleasant secret about his past, both have to flee to escape from the powers of the "Cabal" that controls Reverie from behind the scenes.

It is one of Sterling's earliest novels (1980) and can be thought of as far-future cyberpunk. I clearly remember the floating cameras that follow him all the time and record everything he does. I also remember a very large organism that the Kid and his friends encounter later in the book when fleeing the Cabal. 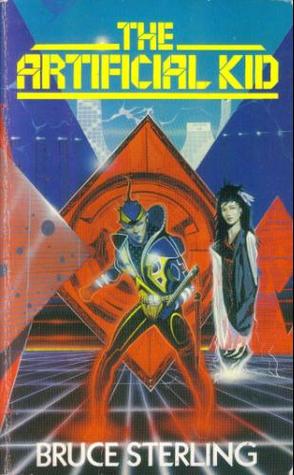 20
Scifi short story where all citizens are armed (golden age)?
22
Sci-Fi book with 4 prison planets
5
Sci-fi from the 60's where population was controlled by using shares
8
Looking for a fantasy book/series where dying people are absorbed by trees
8
Novel about a clone with an unexpectedly stable personality?
33
Main character wakes up from a suspended-animation "test" to discover that the world has fallen apart
17
1960s? movie. Alien Entity gives 6-7 random people scatter around the world the power to wipe out all life in a large area around them
4
Sci-fi book with a main character who dies and is brought back into a sort of digital reality, where he's tasked with leading a combat mission