Was Doctor Strange Marvel's version of Mandrake, the Magician?

I recently relived my youth by watching the Defenders of the Earth series.

I know Mandrake, the Magician predates Doctor Strange, did Stan Lee ever talk about the character being an influence on the character creations?

I spent maybe half of my life reading everything I could find on both Stan Lee and Doctor Strange, who happens to be my favorite Marvel character. I cannot find a single quote from Stan Lee himself about Mandrake.

Stan Lee probably had read some Mandrake comics, which predate the creation of Doctor Strange. But another character had a greater influence. In his autobiography Amazing Fantastic Incredible: A Marvelous Memoir, Stan Lee makes a mention to Chandu the Magician, which is widely recognized as his inspiration for Strange.

Chandu was pretty big at the time. They even made a series of movies with Bela Lugosi as the heroic sorcerer. As you might imagine, when things stick with you for that long, they tend to manifest in later years in the most interesting ways. In this case: Dr. Strange, Master of Black Magic! 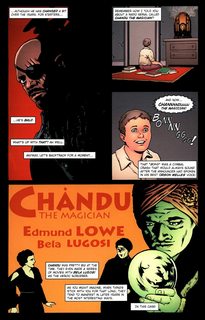 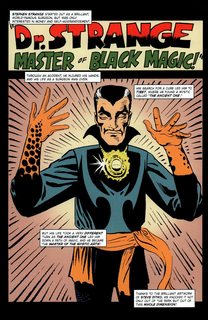 In my opinion, Chandu's mysticism is more in line with Doctor Strange than Mandrake's stage magician vibe.

A mention to Mandrake is made in Doctor Strange Vol. 1, issue 181 (as commented by TheLethalCarrot in the question). However, the writer for that issue was Roy Thomas, not Stan Lee, so most likely Thomas is the one who intended the reference.

Either Mandrake there just zapped you into a snowman... or we've both been partyin' too long! 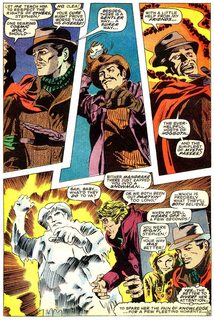 Stan Lee wrote the lyrics for the theme song for the show Defenders of the Earth, which is about a team of superheroes in which Mandrake happens to be a member. The show was originally produced in 1986, decades after the creation of Doctor Strange. This, along with the aforementioned reference in an issue of Doctor Strange, are about the only connections between Mandrake and Stan Lee that can be found on the internet.

Mandrake the magician is the very first superhero of comic books, He was created for King features in 1934 (wich predates even superman) by comic legendary artist Lee Falk (also creator of the first masked vigilante, The Phantom), Mandrake also can travel between dimensions and trough time, fought powerfull beings and can use real Magic (read Kings watch), so, why not mentioned Strange is obviously (maybe partialy) influenced by Mandrake the magician.

MilesR4MilesR4
2111 bronze badge
New contributor
MilesR4 is a new contributor to this site. Take care in asking for clarification, commenting, and answering. Check out our Code of Conduct.
1
Add a comment  |

Not the answer you're looking for? Browse other questions tagged marvel doctor-strange mandrake-the-magician or ask your own question.

65
Is Stan Lee playing the Watcher in all his cameos?
25
Which Marvel movies have NOT included Stan Lee cameos, and why?
7
Are there any Asian superheroes in the Marvel comics who have ever had their own solo series, as of 2016?
15
The true power of Doctor Strange
7
Did Stan Lee Have any input in the creation of the original comic book Deadpool?
8
Was Doctor Strange bluffing in Avengers: Infinity War?
8
Wait, so HOW did Quentin Beck know that Earth was 616?