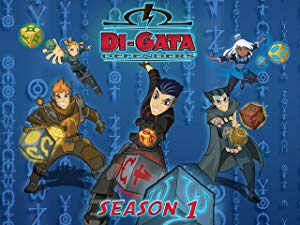 5
2000s bizarre cartoon show about magic cubes?
3
Fantasy/sci-fi cartoon with 4 "guardian" characters with animals determining their powers, one merges with his animal into a monster
2
Early 2010s animated TV show about magic dice
-4
Animated show about warriors who summon giant monsters using rocks covered in runes
10
Animated show with character who has a stone that summons creatures
4
Cartoon with a girl who used boots to help her walk as she couldn't

10
Animated show with character who has a stone that summons creatures
9
Post-apocalypse animated movie involving cyborg and enhanced humans
2
Cartoon show similar to X-Men, with magic stones (it was on Netflix in the 2000s)