I think I watched this in the late 90s or early 00s on British television, although I'm quite sure it was an American movie, probably from the 90s.

This seems to be an episode of the 1998-2001 TV series Seven Days, in which a government project exists that can send someone back in time, but only seven days.

The sphere you remember is the Backstep Sphere (or Chronosphere) and as you can see it matches the description: 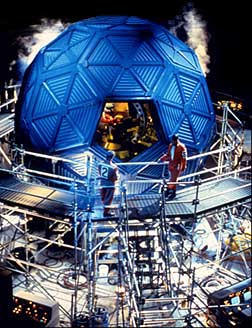 The main time traveller routinely uses a space suit in his journeys... the sphere also shakes a great deal and requires piloting talent: 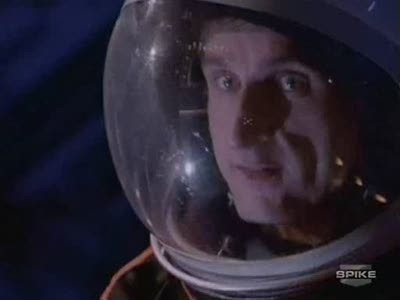 Although the sphere normally projects Frank back seven days, at which point everything sent back in time (the sphere, the pilot, the astronauts) disappear from where they were in the past and are replaced by the new versions. As such, his co-workers typically only learn a backstep has occurred when he and the sphere disappear, and then immediately start looking for him because they know something big must be about to happen.

Of course, being an episodic TV show, things frequently go wrong in unusual ways that mess with the formula. The specific events you remember seem to be from S01E11, "HAARP Attack" in which Frank is regressed to a childlike state after travelling back.

You can see in this video the journey, and him meeting a child in the playground immediately after arriving. His co-workers (searching the area) later (at approximately 26 minutes into the video) find the child with the over-sized-for-him spacesuit, who took it after Frank abandoned it: