Does Marvel have a designated gender-swapped universe in the comics?

A Marvel universe, Earth-TRN454, is shown in the animated series Ultimate Spider-Man (Earth-12041) where Spider-Man is Spider-Girl (Petra Parker). It is revealed that this universe is gender-swapped and we are also introduced to several other characters like She-Goblin (Norma Osborne), J. Joanna Jameson, Harriet Osborne, Nicole Fury etc.

Looking at this, does Marvel have a designated gender-swapped universe in the comics as well similar to DC1? I couldn't find anything in my search and as far as I remember, I haven't encountered anything like this in the comics that I've read either.

PS: I'm not looking for the gender-swapped characters (such as Jane Foster's Thor).

I've had a, albeit brief, search through and currently can't find a completely gender-swapped universe in the comics and I've never seen or heard of one previously. Similar questions on reddit and Quora also have answers saying one doesn't appear to exist apart from the Earth-TRN454 as mentioned in the question.

That said there is a universe (Earth-81114) where this partially happens where we have Nicole Fury and Antonia Stark. These aren't gender-swapped characters like Jane Foster's Thor as she is Thor in the same universe as Thor was Thor. Or, say, Captain Marvel where different people have become the character in the same universe throughout time. The two are Nick Fury and Tony Stark in that universe. 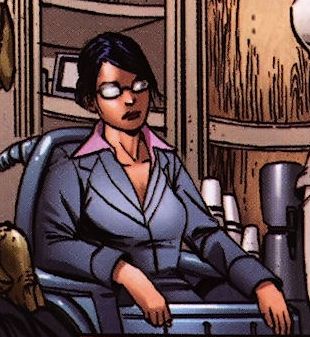 However, this isn't a completely gender-swapped universe as in it we also have Charles Xavier and Wanda Maximoff to name a couple of none gender-swapped characters. Earth-81114 is actually the de-powered universe where no one has any superpowers.

It is also worth noting that in the first issue we see Nicole Fury of Earth-81114, New Exiles Vol. 1 Issue 17, we also see Cat, Catherine Pryde, of an unknown universe (noted in the wiki as Earth-79596). Whilst this itself isn't a gender-swapped universe, the one page we have for Cat (that also shows her death) shows:

All the Cats that ever were, that are, that yet will be. 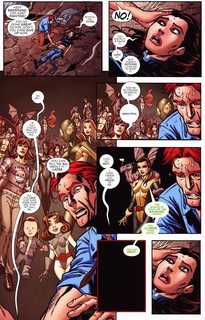 As you can see I have circled 3 Cats that appear to be male in the upper-left corner of the relevant panel. Whilst this is only proof that there are male Cats, it does hint at the possibility for a gender-swapped universe.