In the book, an alien Captain ends up on a transport ship as a prisoner. He and some of the others manage to get enough control of the ship to make it crash on Earth instead. If I remember, he also manages a bit of telepathy with a genius prisoner already in jail. The Earth prisoner has already subverted the system and it's a case of "the prisoners running the prison". Between the two of them, they choose to bring the ship down during a thunderstorm and bury it at the remote jail to hide it from the government. Soon enough the rest of the aliens are proving with their actions why they were prisoners already. At the end, the alien Captain, the biker genius and his girlfriend escape on board the repaired spaceship. The biker's girlfriend is concerned that the humans are going to be eaten by the Captain (something that happened in the prison with another alien), just to be laughed at -- 'Oh, you didn't know? Captain BlahBlah is a vegetarian!' 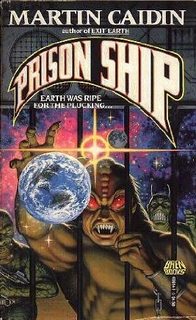 Not all aliens are as cute and cuddly as E.T.....
At last the hopes and dreams of earthpeople yearning for contact with the stars are fulfilled - by six of the most ruthless and depraved convicts that a galactic system advanced only in its methods of cruelty and oppression can produce. When they and their technology team up with a band of human desperadoes it's going to be hell on earth!

This review has more detail, including a description of the three main characters:

`Prison Ship' features three main characters; two human, and one alien. The main human character is Jake Marden, a sort of secular Jew-version of Doc Savage, but with a fondness for committing crimes, not deterring them. The other character is a Bad Azz Mofo black man named Jube Bailey. Jake and Jube meet up in Old Millford Prison, a state penitentiary located in Florida. Jake and Jube, by virtue of their physical size, ferociousness, and intelligence, take command of the prison and turn it into their own unique criminal enterprise.

The third character is an alien named Arbok; once a hotshot interstellar pilot, Arbok has been convicted of murder and is sentenced, along with five other aliens, to certain death as a slave laborer on a prison planet in a galaxy far, far away. Arbok leads an insurrection aboard the Frarsk, the prison ship of the book's title, and commandeers the vessel to a distant galaxy and one of its few habitable planets: Earth.

Arbok and Jake establish a quasi-telepathic link and soon the Frarsk touches down on the grounds of Old Millford. What happens when six homicidal aliens team up with a small army of homicidal earthmen ? Nothing good, that's clear. There will be VERY little singing of `Kumbaya' around the fire and heartfelt messages about Peace, Love, and Multicultural Understanding. There WILL be plenty of violence and atrocities.

Not the answer you're looking for? Browse other questions tagged story-identification aliens novel spaceship or ask your own question.

7
Looking for the title of a sci-fi novel about an alien who crash lands on earth and the mysterious fuel required to restart her spaceship?
4
Short Story: Explorer crash–lands on uncharted planet, is stripped of technology and observed by alien?
6
Trying to find title of novel where Earth people are taken on board an alien ship
10
Sci fi novel where Earth is occupied by a colonial power (alien )
8
Novel where Earth has a caste system
8
Book partly set on a prison planet where prisoners are simply dumped and left