A card monster anime that is not Yu gi oh

Well I watched this anime few years ago and I can not remember it's name nor most of the plot, but I will try my best to describe it.

It has similar plot like Bakugan, but with cards. There is a group of friends that have those cards which can activate some monsters and they can battle other people like that. In that anime there are Death Eaters OGs that were a cult like group with tattoos. A brother of one character is in that cult and then when needed he confesses and tries to help them save the world from that cult organization. The head of the cult has this one monster that can suck in other monsters and take their powers, killing them in the process. The group has to stop that monster somehow. The deaths of those monsters were extremely sad as characters were bonded with them emotionally and the development of characters is amazing. 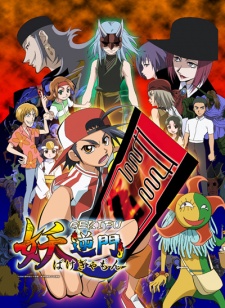 Sanshiro's chances of having an adventure are slim to none in his tiny island hometown, until the day a mysterious stranger invites him to play a game... Without warning, Sanshiro is taken to a backwards universe to play BakéGyamon—a game pitting monsters against monsters. Along the way he meets other players who have a particular reason for being there—to obtain the wish that is granted to the winner. But how far can Sanshiro get when the monsters he's been paired with are a bunch of little mud balls?

I think you may be looking for Digimon Tamers.

Takato Matsuki, a fan of the Digimon card game, finds a Blue Card, which transforms his card reader into a D-Power. His original Digimon creation, Guilmon, materializes into real life when his D-Power scans his drawings. Takato meets Henry Wong and Rika Nonaka, two other children who are partnered with Terriermon and Renamon, as well as Calumon and Impmon. As wild Digimon began roaming Shinjuku, the Tamers defeat them and defend the city. Using their D-Powers, the Tamers can Digi-modify through scanning cards or help them Digivolve. After each Digimon is defeated, their Digimon obtains their data.

Hypnos is the cult. Impmon becomes Beelzemon and starts draining the other Digimon.

Impmon is granted the power to become Beelzemon, and blinded by the power, goes down a murderous path. He begins destroying virtually anything that comes in his way, eventually killing Jeri Katou's partner Leomon, triggering a battle that nearly ends in his destruction as retribution for Leomon's death. He is spared at the last moment by Jeri, her reasoning being that while she hated him for what he did, she didn't want to see anymore lives lost. Shaken by this display and considerably weakened from battle, he wanders off, now guilt-ridden and ashamed of his horrific deeds. He de-digivolves into Impmon again after being attacked by a group of Chrysalimon, whom he allows to attack him because he no longer wanted anything to do with the power that he formerly so reveled in, and is essentially left to die. Luckily, he is found by Renamon and Rika Nonaka, who decide to bring Impmon back into the Real World. After being not only spared, but saved by the people he had once hated and tried to destroy, Impmon eventually resolves to try and make right all the wrongs he'd committed towards others, especially Jeri and the other Tamers.

The boar mon would be Vikaralamon. 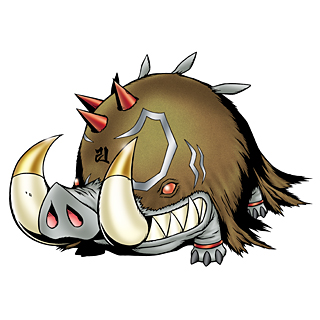 Found by scanning the TV Tropes Mon page, and vaguely recalling Digimon Tamers as having some uncharacteristically dark storylines, then looking around the wikis to find confirming details.

3
Anime with monsters contained in cards

3
Anime with kids deemed dangerous to humans because of their abilities, protected by a centuries-old man who can transform into a monster
7
An anime about a boy related to gems/crystals
7
Animated movie about a card game that came to life
9
Anime about boy & summoning monsters
7
Anime: main character has control over time on cards and uses them to fight time monsters; characters lose memories if they speed up time
5
2000s(?) anime: a girl uncovers a government secret and can control a phoenix-like monster
5
Anime about high school student that protect their school from monster or maybe ghost
3
Anime with monsters contained in cards