What is the earliest example of an accidental origin of life or civilisation? 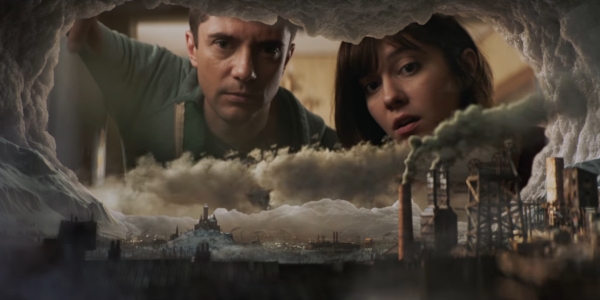 The essence of the trope goes like this: Somebody creates a new biosphere or civilisation by accident, such as leaving some sandwich lying around. Often, the product is microscopic with respect to the creator and they get to play god, but that’s not a must.

It is essential that the the creation is accidental and not intentional (or unknown).

The following feature microscopic life, civilisations, etc. that are of unknown origin or created intentionally:

I would be surprised if Dirk Gently is really the first to use this trope in fiction, in particular since serious examples as well as the idea of a microscopic civilisation have been around much longer.

So what is the first example of this trope in fiction?

Larry Niven's 1966 novel, World of Ptavvs, is an example (published earlier, 1965, as a novella). In this case, the Earth is seeded with food yeast some billions of years ago, and the yeast accidentally evolves into all subsequent terrestrial forms of life. From the Wikipedia summary of the plot:

Eons ago, Kzanol's spaceship had suffered a catastrophic failure; its reactive drive system failed and the navigation computer automatically jettisoned it. Faced with insufficient power to use hyperspace, Kzanol aimed his ship at the nearest uninhabited Thrint planet used to grow yeast for food (Earth), and turned his spacesuit's emergency stasis field on to survive the long journey and impact. He also arranged for his ship to change course for the system's eighth planet (Neptune) after he was in stasis, with his amplifier helmet and other valuables stashed inside his spare suit (in order to hide these valuables from any rescuers).

Although he assumed that the resident Thrint overseer would be able to rescue him after seeing the plume of gas created by his impact, his timing could not have been worse; while he was in stasis, the races enslaved by the Thrint revolted. Facing extinction, the Thrint decided to take their enemies with them by constructing a telepathic amplifier powerful enough to command all sentient species in the galaxy to commit suicide. (Only the artificially created Bandersnatchi survived, having been secretly designed to be resistant to the Power.) After hundreds of millions of years, the yeast food mutated and evolved into complex life on Earth.

It's part of the backstory in At the Mountains of Madness by H. P. Lovecraft (written in 1931 but not published until 1936). The Old Ones (as they are known in that story; to distinguish them from other beings known by that name, they are frequently referred to as the "Elder Things") were supposed to have created life on Earth as "a joke or mistake."

In fact, this is sort of a meta-example, since it is actually clear from the story that the Elder Things did not create life on Earth as a mistake. They created the shuggoths intentionally, and the extent to which other life forms were accidental byproducts is unclear. However, in universe, the Necronomicon states that life on this planet was created as a joke or a mistake.

Those two stories, and possibly others I can't think of at the moment, thus spread the concept of introducing life and ecosystems to another planet, perhaps by accident.

So science fiction has a long history of considering the possibility of introducing lifeforms into previously lifeless settings and thus creating new and possibly permanent ecosystems, either deliberately or accidentally. The further step of creating civilizations of intelligent beings no doubt appeared much later, but that is not a requirement for the purpose of the question.

So a chronological list from this answer and other answers and comments would be:

And I suspect there should be a number of other examples, and it is quite possible that the best candidate for the first example has not yet been mentioned.

In 1751, the Danish-Norwegian Ludvig Holberg published Moral Fables, of which No. 81 was Midernes art og egenskab (The Ways of Mites)¹. It describes a civilization of mites having sprung up on an old cheese in a farmer's larder.

The setting, which may or may not make this a close call is a past where all animals were sentient and the story is written as a report by a group of worms who were sent as anthropologists by the other animals. (Holberg uses the word missionaries.)

The story is a satire on religion, with the mites believing the world (the cheese that is) having been created for them and some mites identify the milk-maid as a benevolent creator god and the rat who eats of the cheese as evil incarnate. They pray to both though, to placate the rat. A few heretic spinoza-mites reject the notion of a creator as ludicrous and believe that the cheese has always existed and always will.

Not the answer you're looking for? Browse other questions tagged history-of biology or ask your own question.