What were the prevailing real-life cultural connotations of "clones" in 1975 (Star Wars' 3rd draft)?

The original 1976 Star Wars script references The Clone Wars (which wouldn't be realised in fiction until decades later):

LEIA: General Kenobi, years ago you served my father in the Clone Wars. Now he begs you to help him in his struggle against the Empire.

(Leia was referring to her adopted father, Bail Organa, and not Anakin Skywalker/Darth Vader, of course).

According to starwarz.com, which has copies of early drafts of the scripts, the term "clone" was added in the 3rd draft in 1975.

Ben: I know who you are. Stand up so that we can talk properly. You’re embarrassing me. I’m not that important.
Luke: But you are… I know your ‘Diary of the Clone Wars’ by heart. My father…

What struck me was that 1975 predates cloning as we know it today. While 1975 was the same year a mammalian embryo was created via nuclear transfer from another embryo, it isn't the same thing as cloning from an adult, so if this event made headlines I doubt it would have inspired the Star Wars' EU story.

Looking at Google Ngram, the noun "clone" was significantly more popular than "cloning" (the verb, implying a known process for creating clones exists) which goes with the progress made in genetic and reproductive research made since the 1960s. 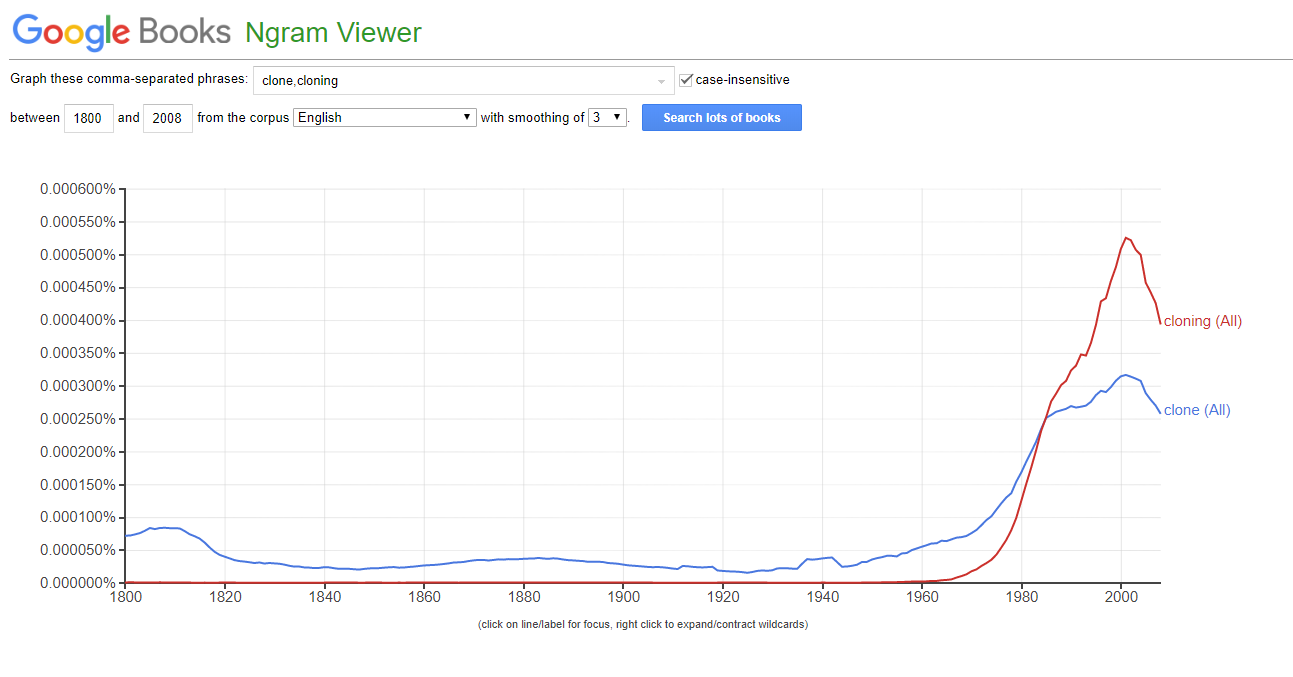 While I know Lucas was an avid sci-fi follower, I don't believe nor recall me personally coming across any sci-fi literature about clones or cloning written before the 1980s (making Star Wars a standout anyway).

That's just a few examples of cloning and clones in science fiction in 1975 and earlier. I could find more if I spent a bit more time at it. Long story short, Lucas was not proposing anything novel or unfamiliar to SF.

According to the Oxford English Dictionary, the word clone first entered English as far back as 1903 to describe plants that were duplicated through grafting (or similar). Another early use of the word describes asexually reproduced cells. This sense dates back to at least 1929.

The "duplicate person" sense of clone can be found as far back as 1970, in a book called Future Shock, talking about the future of science:

Through a process known as “cloning” it will be possible to grow from the nucleus of an adult cell a new organism that has the same genetic characteristics of the person contributing the cell nucleus.

And here is another early example of clone (this time as a verb), from the 1973 movie Sleeper:

We're gonna make an attempt to clone the patient directly into his suit.

Cloning as a scientific process might not have been mature in 1974, but the idea of a Doppelgänger had been around for hundreds of years

A doppelgänger (literally "double-goer") is a non-biologically related look-alike or double of a living person, sometimes portrayed as a ghostly or paranormal phenomenon and usually seen as a harbinger of bad luck. Other traditions and stories equate a doppelgänger with an evil twin. In modern times, the term twin stranger is occasionally used. The word "doppelgänger" is often used in a more general and neutral sense, and in slang, to describe any person who physically resembles another person.

A lot of clone stories have probed this, since a clone is literally a copy of another person. In 1970, there was The Man Who Haunted Himself, which was another in that vein.

I mention these because science fiction of the day simply told you what science might be able to do someday. The first person to describe what we know as cloning was in 1938

German scientist Hans Spemann proposes a "fantastical experiment" to transfer one cell's nucleus into an egg without a nucleus, the basic method that would eventually be used in cloning.

This made its way into esoteric science fiction

Long before the word "clone" became popular, sf writers had considered the possibility of duplicating people for Eugenic purposes. Poul Anderson's "Un-Man" (January 1953 Astounding) refers to its cloning process as "exogenesis". Here and in John Russell Fearn's The Multi-Man (1954 as by Vargo Statten) the idea is used as a gimmick, and the possible consequences of such technological development are left unexplored. A more ambitious application of the notion is found in "When You Care, When You Love" (September 1962 F&SF) by Theodore Sturgeon, in which a rich woman attempts to reproduce her dead lover by growing him anew from one of the cancer cells which have destroyed him. Among the nonfiction books that popularized the term was Gordon Rattray Taylor's The Biological Time-Bomb (1968), which commented on the implications of experiments carried out by F C Steward in the early 1960s on the cloning of plants: "It is not mere sensationalism to ask whether the members of human clones may feel particularly united, and be able to cooperate better, even if they are not in actual supersensory communication with one another." This possibility has been widely explored in such stories as Ursula K Le Guin's "Nine Lives" (November 1969 Playboy), Pamela Sargent's Cloned Lives (1976), Kate Wilhelm's Where Late the Sweet Birds Sang (1976) and Fay Weldon's The Cloning of Joanna May (1989) – televised as The Cloning of Joanna May (1991) – in which intimate human relations are examined in depth and with some sensitivity.

There's plenty of material contemporary to him. But most notable would be THX 1138 (George Lucas, 1971)

In the 25th century (as stated in the novel; the film never specifying a year), sexual intercourse and reproduction are prohibited, whereas use of mind-altering drugs is mandatory to enforce compliance among the citizens and to ensure their ability to conduct dangerous and demanding tasks. Emotions and the concept of family are taboo.

You'll note that Lucas never bothers to define what a "clone" is, just that

He probably just threw the word in for worldbuilding at the time.

According to The Encyclopedia of Science Fiction one of the first uses of "clone" for people instead of plants (where the usage is much older) was the book The Biological Time-Bomb (1968) by Gordon Rattray Taylor:

It is not mere sensationalism to ask whether the members of human clones may feel particularly united, and be able to cooperate better, even if they are not in actual supersensory communication with one another.

In the same year George Baker, writing as "P.T. Olemy", wrote a novel The Clones where, again according to SF Encyclopedia "Clones, because of their powers of communication, may be able to save Earth from invasion by aliens; or in fact help Earth invade other planets in turn."

So I think we can say that by 1968 the term "clone" was being used for duplicated humans in the way we understand it now, though that doesn't speak to how well known it would have been, or if George Lucas would have been aware of it yet.

I am not a great expert on science fiction in every form of popular medium from before the Star Wars script first mentioned the Clone war, but I can remember at least two mentions of duplicating people from science fiction television show from before star Wars.

In "The Infinite Vulcan", which was broadcast on 20 October 1973 (and was also mentioned in Laurel's answer):

(The image on the screen does appear to be the giant, wearing a lab coat with a nice array of pens in the pocket)

MCCOY: There used to be a story about a modern Diogenes wandering the galaxy looking for someone special.

KIRK: Someone special. A perfect specimen, perhaps. Yes, I've heard it too.

MCCOY: It couldn't be Keniclius. He'd be over two hundred and fifty years old.

KIRK: Not if he cloned a new copy of himself every so often to carry on the search. Remember, he said he was Keniclius Five.

STAVOS: It's too late, Captain Kirk! In a few minutes your friend will be gone. But as Keniclius One lives on in each of his clones, so will Mister Spock. Behold, gentlemen, the dawning of a new era, the salvation of a galaxy! Spock Two! (A giant Vulcan looms over them)

STAVOS: More than just drained. It's been transferred, relocated into the mechanism itself. I can duplicate exact physiological structure. I cannot duplicate that which is learned. Just as my predecessor transferred his knowledge to me through his apparatus, I have done that with Mister Spock and the first of his clones.

So watching "The Infinite Vulcan" would be enough for George Lucas to hear of clones and cloning.

So there are two prominent examples, that I could remember, of duplicating persons in science fiction television shows from the 1960s and 1970s. And the later episode definitely used the words "cloned" and "clones".

And there might have been other television episodes, and radio shows, and comic strips, and comic books from the 1960s and early 1970s which featured duplication of people and perhaps mentioned clones and cloning.

The British sci-fi TV series "Timeslip" (1970-71) consisted of four stories, the second, third and fourth of which dealt extensively with clones, and referred to them as such:

Just to draw some analysis from all of the good answers here, I can see two relevant connotations of cloning that were in the air at the time. First, there was the idea that you could find one ideal source and clone a perfect army. Lucas clearly used that one in the prequels. And second, there was the idea that there might be some kind of mysterious connection, perhaps a telepathy or some kind of shared identity. This reflects a poor scientific understanding, but it was clearly in the air. Lucas doesn't seem to have used it later, but it may have affected the vibe when he mentioned it in the original film.

Not the answer you're looking for? Browse other questions tagged star-wars history-of clones or ask your own question.

28
How did Luke suddenly know that Leia was a "Princess"?
42
Why was the single war between the Republic and The CIS called "The Clone Wars"?
119
Which wars are "Star Wars"?
16
Is the Leigh Brackett first draft of the script for Star Wars episode 5 available?
2
How are the clones created in Star Wars
4
Why didn't The Galactic Republic clone The Bad Batch (Clone Force 99)?