Classic cartoon about kids kidnapped and turned into mute slinky skinny lizard like humanoids. They had faces kinda like the Momo faces.

This was like 80's 90's, made into a TV special. I think the boys ran away or were kidnapped in a carnival but were later turned into this slinky creepy-looking humanoid lizards who couldn't talk, so no one would know they were actual kids. They kind of wobbled funnily when they walked. 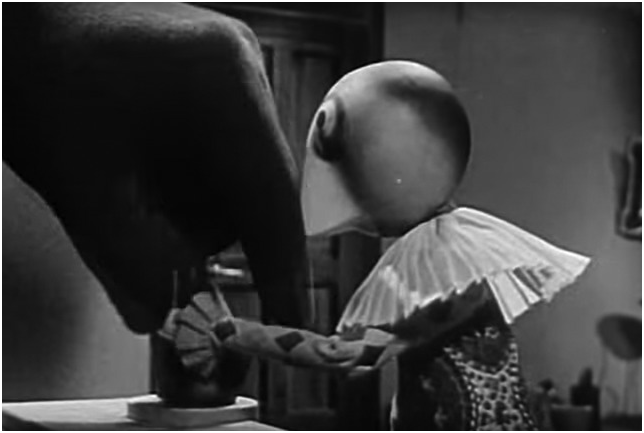 OP found their answer in a comment; it was The Care Bears in the Land Without Feelings, a television special of the titular Care Bears released in 1983.

Kevin, a boy on Earth, is upset because he has to move away from his younger friend Donna. Declaring that he doesn't care, he decides to run away and ends up in The Land Without Feelings, which is ruled by a misanthropic and winter-centric mad scientist named Professor Coldheart. He turns Kevin into a green amphibian-like goblin via a soda-like potion and declares him a slave. The Care Bears, along with Donna, go into the Land Without Feelings to save Kevin along with the other children who were turned into Coldheart's goblin slaves. Tenderheart Bear makes an attempt to climb up to Coldheart's castle, but is caught in a trap by Coldheart himself on the way up. Wish Bear makes an immediately granted wish to be teleported to Coldheart's castle with Grumpy Bear and Donna (and all the other Care Bears too, including Tenderheart), after several times being interrupted when attempting to make a wish and seeing if it would actually come true. The Care Bears use their magic 'Care Bear Stare' to change Kevin and the other children back to human, and Coldheart makes a break for it.

The episode is available on YouTube, here timestamped to the boy's transformation into the lizard:

14
Title of story about human astronauts who crash on an alien planet with lizard-like humanoids
12
Looking for old short story about inter-dimensional flashlight
8
Cartoon about some kids who found dinosaur fossils and made them into pets
1
Cartoon about 3 kids on a spaceship that could turn into monsters from a device
5
90s live action TV show about college kids who become fighting robots in a virtual reality
6
Cartoon series: kids disappearing under bed into rectangular blue portals
2
Cartoon about kids capturing monsters