Book including space travel - ships with spires or pillars

Just a warning: I know very little about this book. If you're going to be frustrated by a lack of detail you might want to give this one a miss. If you still want to try, thank you!

This book is a science fiction novel, with FTL space travel being commonplace.

The only real detail I know about this book is that the ships in the universe (or at least the ship of the protagonist) are large ships, and the surfaces of these ships are covered with these 'spires' or 'pillars'. They aren't called spires or pillars as they have a proper technical name, but I don't remember this name. The way the ships are described made me picture them in a similar way to Hovercraft from The Matrix, specifically the hoverpads that cover those craft and constantly crackle with energy. These 'hoverpads' form a major component of the ship's propulsion, enabling FTL travel when the ship has enough. The more functioning hoverpads a ship has, the faster it goes.

There is a section in the book where a lot of these hoverpads are damaged by an attack from another ship, and the ship is no longer capable of going FTL, leaving them effectively stranded. A protagonist must spacewalk on the surface of the craft to inspect or fix some of these hoverpads. This is extremely dangerous because of the huge amount of radiation given off by the pads. I believe the protagonist succeeds. It's clear in the book that this very rarely or possibly never happens, as it's so dangerous.

The reason I remember the image of those ships covered in these hoverpad things is because I listened to the U2 albums The Joshua Tree and How To Dismantle An Atomic Bomb on repeat whilst I read the book. Now every time I hear a song from one of those albums I get a vivid image of the ships and a burning desire to know where they came from. (I know this isn't relevant but it's a very strong image. I've been listening to the albums to try and jog my memory!)

I would guess this is A Fire Upon the Deep by Vernor Vinge. The spires you are thinking of are the ultradrive spines that coat the surface of FTL ships. I've included the cover, though annoyingly the ship shown on the cover doesn't have the spines: 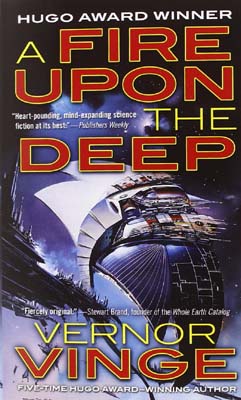 There are various scenes where spines are damaged and repaired, though I confess I don't remember anyone going EVA to do it. My recollection is that the repairs are done by automated systems.

The spines were discussed in the question What is an ultradrive spine?

With the Lightenings and the following books of the RCN/O'Leary series by David Drake feature a FTL drive whose field is created and adjusted by masts extending from the hull of the ship. If a ship loses masts, it loses speed and maneuverability until it can't maintain the field any longer. The riggers sometimes need to fix them in the middle of battle, which can be very dangerous.

(I need to dig the book up to fill in more detail, this is all from memory.)

Another book (a couple books, actually) with FTL systems that are close to those in the question: Henry Martyn and Bretta Martyn (and the short graphic novel set after them, Phoebus Krumm. These were set in a far future in which ordinary clothing was "keflar", personal weapons were "thrustibles" (used roughly like swords, they could both strike and block), ship weapons were very large thrustibles that were somewhat unreliable (tended to explode) -- and ships had hulls shaped like large pots with tall masts and broad yards, all enclosed by a field that held air for breathing. The yards supported sails that propelled the ships, and battle was similar to that of the "Age of Sail" -- tacking for position, firing broadsides and "as you bear", and yes, men (and women) in the rigging to change sail and repair damage as the battle progressed.

Working the rigging was dangerous (just as in the 18th century) because of the danger of falling (the ships had artificial gravity), both onto the deck and overside (passing through the air field was a quick death sentence, of course).

Another author possibility is David Weber.

Without the alpha node, Fearless couldn't reconfigure her forward impellers for Warshawski sail.

From On Basilisk Station

That particular book doesn't have any external repairs going on, but he's got lots of books written. This book didn't cover a lot of detail on the "sails", but I recall other stories going into more detail and possibly some outside repair.

8
What is an ultradrive spine?