I read this book very long ago, I forgot most of it.

In this novel, magic works, but it is very close to "our" world. Some historical figures are common with ours.

Some guy tried some magic that did not work as he had hoped, and a curse fell on him. So to survive he had to swap often his mind into someone else's body, and each time he did it, he managed to put his previous body in a fatal situation, so the mind that went into that body died, not to be able to "tell on him" (because of course that mind knew in what body the killer was, it was the mind's original body!). That worked for quite a few times until once he miscalculated and the old body survived. So the surviving other mind tried to get at him, and eventually did succeed.

There were many more things, it was a very rich novel, but I cannot remember anymore to help narrow it down, sorry.

There might have been time-travel, too, but I am not sure.

I think, but am not sure, that the main character is a time traveller stuck in the past, and he is the one who escapes death in the last-but-one body occupied by the killer, and kills the latter at the end. But this is a bit of a reconstruction, I am not really sure of that.

Amenophis Fikee: a powerful magician, Fikee is the Master's agent in Britain. He leads a clan of gypsies and wears clogs to avoid contact with the ground. After a magical ritual misfires, his mind snaps and he becomes Dog-Face Joe. Bodies that he inhabits grow fur, but he uses a body-swapping spell to flee the curse, poisoning his old bodies to prevent discovery.

There surely was. The story starts in modern times, spends most of the story in early 1800s London but flits back to the 1600s for a chapter or two.

Almost spot on, except it's not actually him who kills the latter.

As per my comment above, Wild Seed (1980) by Octavia E. Butler fits some of the points. 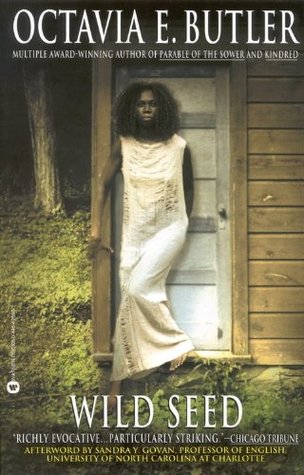 Doro is an entity who changes bodies like clothes, killing his hosts by reflex or design. He fears no one until he meets Anyanwu. Anyanwu is a shapeshifter who can absorb bullets and heal with a kiss and savage anyone who threatens her. She fears no one until she meets Doro. Together they weave a pattern of destiny (from Africa to the New World) unimaginable to mortals.

Doro would be the immortal body-swapper. And, as per your clarification of a "rich novel", this is a book with multiple threads. It is set in historical Africa and the United States, from about 1400-1800 (and serves as a prequel to the Patternmaster series, set in the far future). I haven't seen any references to Doro making that fatal mistake of leaving a host alive, and you didn't mention an immortal female who falls in love with him, but I figure it's close enough to post as a potential answer.

The film Fallen (1998) has many similarities - perhaps inspired by the book?

A demon, thousands of years old, kills people for the hell of it, and eludes arrest by swapping bodies upon touch.

Sounds kind of like Charles Eric Maine's novel 1955 called Timeliner where the protagonist is 'flung' forward in time to another body when the one he's in dies, replacing the personality of that body. Every jump result is in a body who is close to someone resembling his wife.

7
Looking for a serial-body-swapping story that is NOT Levithan's "Every Day"
11
Pre-70s time travel novel: man dies, wakes up in the future in another body, and repeats the process until medical science has progressed very far
11
Short story I read - Outsiders enter hedonistic utopian society where citizens live forever by transferring bodies, havoc ensues
8
Book about mind-to-mind jumpers
12
Title/author of novel(s?) about society where children learn alien languages?
9
Novel where a berserker involuntarily kills a female magician he may have loved
20
Novel in which a man transforms into an alien - published as a serial
19
Novel about a replica of earth where history happened slightly differently after the ~1940s