Book about a man who purposely goes to a vividly described Hell, maybe a detective

Sometime in 2015-2017, I read the first chapter or so of a trade paperback book. The cover included quite a bit of red. The name might have been the name of the main character. It was most likely American, but it might have been British.

It was about a man, I think with supernatural abilities, going to Hell to try to get something from Satan. It really detailed Hell a lot. The first chapter talked about how there were lots of naked, newly dead people walking in at the same time as him. I think Satan had a throne that was described. The man had the power to go back and forth without dying, I think. I feel like maybe he was investigating something.

There must be a lots of books that have plots like this, but the one that sprang to my mind was Johannes Cabal the Necromancer by Jonathan L. Howard (2009). 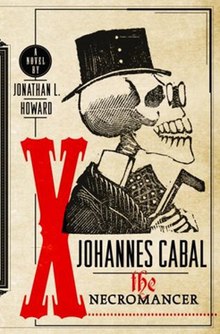 The book opens with Cabal going to Hell to make a deal with Satan, and there is a description of all the naked newly dead souls queuing up at the gates of Hell. Satan's throne is described as:

The throne was only a throne by dint of its vast scale; otherwise, it was simply a big stone chair on the end of a rocky peninsula that extended into the centre of a lake of boiling lava. All in all, it was less of an audience and more of a fireside chat.

Satan sat comfortably on the unyielding basalt throne, massive and urbane. All things to all people, he looked exactly as you’d imagine. Exactly. He snapped his fingers.