A scientist is stranded on a planet with sentient birds

Could you please help to identify sci-fi story/book about a scientist who was stranded on a planet with sentient birds. He probably didn't crash, but something went wrong when he was making experiments on the surface of the planet. I vaguely recall that in the beginning there was something regarding colored laser. And scientist's suit protected him from piercing attacks by automatically becoming rigid. Birds' level of technology was very low (more like tribes). Unfortunately I completely forgot how the book progressed and ended but it was a funny book. I read this book at least twenty years ago. A spicy detail if I may, there was a joke when a female bird said to a male bird "then you will not get what families are made for" (referring to sex).

I believe this is Midsummer Century by James Blish.

The scientist is not transported to a different planet, but to Earth 23,000 years into the future. His mind is initially transported into a machine, but he learns to transport his mind into the bodies of the primitive humans that co-inhabit this future with the intelligent birds.

An accident propels the mind of the young astrophysicist John Martels 23,000 years into the future, the midsummer century. Note that according to this novel the mind is a complex self aware electromagnetic field. His mind emerges in the brain-case of a future being with a powerful mind, the so called Qvant. Human civilization has fallen & repeatedly risen. Both humans & birds have evolved. Birds have evolved into telepathic beings seeking to exterminate their main rivals: humans. Human descendants of the 250th century have paranormal powers but are death oriented & haven't developed an advanced civilization. They're not even interested in organized resistance. John Martel is thrust into a fight for the continued existence of his own mind as well as a fight for the existence of humanity and that without being able to use his own physical body.

There is a shorter version published in The Magazine of Fantasy and Science Fiction, April 1972. I believe it is this shorter version that I have read, since I don't remember it as a separate book. 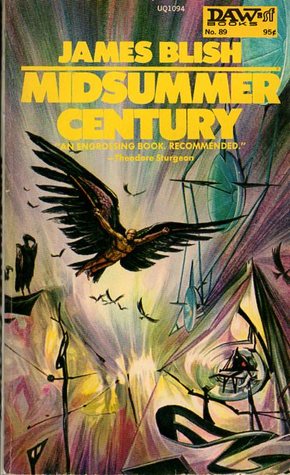 If this is the correct answer, it is a duplicate of this question.