Where do Green Arrow and Hawkeye get their arrows?

Green Arrow and Hawkeye have some pretty awesome arrows. The Green Arrow wikia goes some way to explaining these:

Since that time, Ollie has used his wealth and resources to fashion specialty arrows suitable for all occasions.

But it's pretty vague. Do they have a stash somewhere? Are they third party made, i.e. is there a 'trick arrow factory' somewhere?

Strength level: Hawkeye possesses the normal human strength of a man of his age, height, and build, who engages in intensive regular exercise.

Abilities: Hawkeye has trained himself to become an expert archer with near-perfect accuracy. He practices a minimum of two hours per day to keep his skills honed. He has also had extensive training as an aerialist and acrobat, and personal tutoring by Captain America in hand-to-hand combat. Hawkeye possesses vary keen eyesight and exceptional reflexes. Hawkeye is 80% deaf in both ears, due to an incident, and wears specially-designed miniature hearing aids. 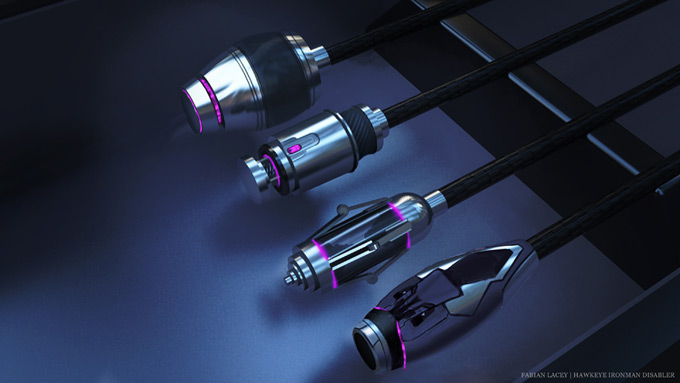 Hawkeye uses a wide variety of arrows, many of which are custom-built with devices to enhance their effectiveness in crimefighting. Hawkeye's quiver has the capacity to carry 36 arrows. Twelve of the 36 arrows have standard target-point arrowheads, six have 3-bladed broadheads, and the remaining eighteen have various custom tips. Hawkeye has recently developed a modular arrowhead system whereby certain custom arrowheads can be attached to the shafts of any standard target-point arrow to convert them for special use. These arrowheads are stored in compartments on his tunic-belts.

Although some of Hawkeye's more technological custom arrows were designed and built by Anthony Stark. Hawkeye himself designed the majority of his custom arrows. To aid Hawkeye in locating the appropriate arrow with speed and accuracy, he has not only arranged the arrows in his quiver in a set pattern, he has also notch-coded the hock of each arrow so he can tell by touch which arrow he is drawing. Hawkeye is constantly modifying his arsenal of arrows.

Strength level: Green Arrow possesses the normal human strength of a man of his age, height, and build, who engages in intensive regular exercise.

Abilities: Green Arrow is arguably one of the finest archers on the DC Earth. He is also an Olympic level gymnast and a world class martial artist. He is able to fire 29 arrows, accurately, in a single minute. To maintain his level of fitness, he trains constantly to keep up his speed, his fighting skills and his accuracy. He is also an accomplished swordsman.

Weapons: Green Arrow uses a variety of bows including composite and longbows. He was once a proponent of trick arrows but nowadays prefers to use normal arrows with pinpoint accuracy. 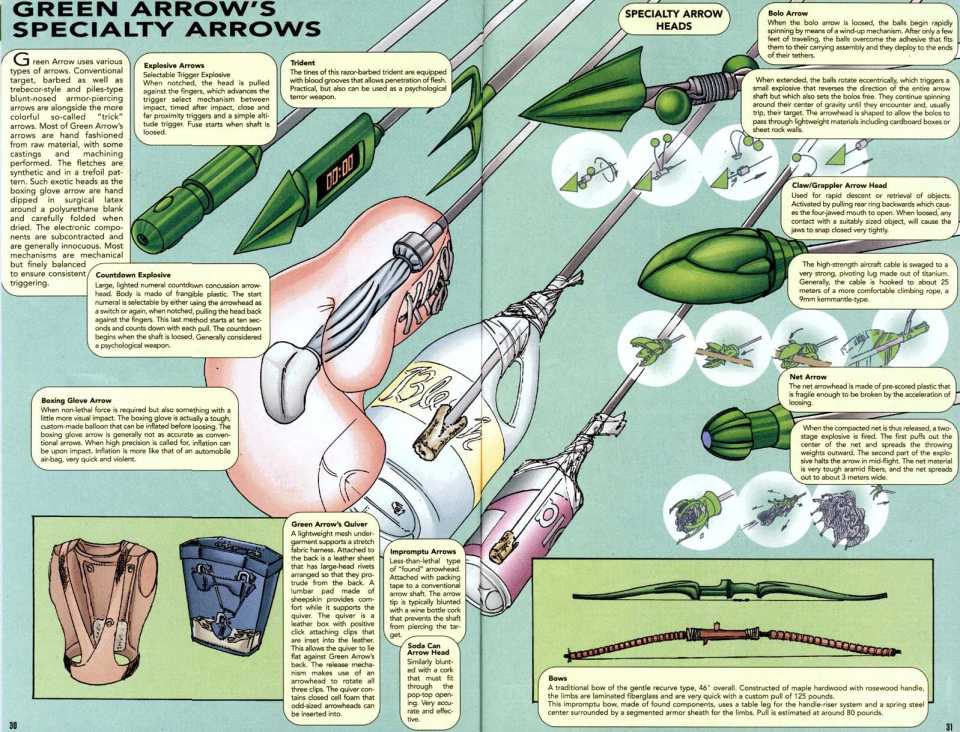 In most of the DC continuities, Green Arrow designed his own arrow loads during his long history as DC's preeminent archer. In the early days when he owned his own company and strongly resembled Batman, he used his vast fortune to create the specialized non-lethal arrowheads he and his sidekick Speedy/Arsenal used.

I read that Hawkeye's recurve bow has an unbelievably high draw weight of 250 lbs. (that's awful heavy as the best hunting recurves out there top off at 65 lbs. draw) considering that, most if not all the arrow shafts commercially available would not be able to stand the force of launch from that bow as they could break apart, they would have to be specially produced for him. Maybe a Stark 3-D printer (or something like what Stark uses for building lots of Iron Man suits) for making them? The same could be said of making Green Arrow's shafts and arrow components as well.

Many archers I know (I'm a recreational archer myself) do make their own arrows, actually assembling them, buying bare shafts and adding the components by hand or with devices like fletching jigs. You can make several dozen in less than a day and after the glues have cured, you can use them. The trick heads, I just have to assume that these characters are really good at inventing amazing stuff like Peter Parker making those web shooters but that's part of what makes these comics fun.

Not the answer you're looking for? Browse other questions tagged marvel comics dc green-arrow hawkeye or ask your own question.

5
What varieties of arrow has Hawkeye used?
30
What are the differences between Hawkeye and Green Arrow?
14
Where do the X-Men get all their money/funding?
4
Prior to the CW tv series, has Felicity Smoak had any interaction with the Green Arrow?
19
Why does Green Arrow hate Batman?
1
Why is Hawkeye using a sword instead of bow and arrows?
6
Did Green Arrow ever acknowledge Batman as a "role model"
1
How did Green Arrow find and access Prometheus' lair?
2
Has the Green Arrow gone on a different planet?